NBA schedule won't have games on Election Day this year 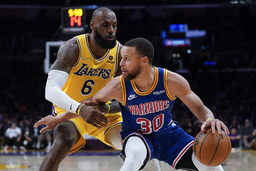 The NBA will be off on Election Day.

The league's schedule for the coming season will have all 30 teams playing on Nov. 7, the night before the midterm elections. The NBA is hoping teams use that night as an opportunity to encourage fans to get out and vote, plus amplify the need for civic engagement.

But on Nov. 8, which is Election Day, no NBA teams have games scheduled. Teams are being encouraged to share election information - such as registration deadlines - with their fan bases in the weeks leading up to Nov. 8.

"The scheduling decision came out of the NBA family's focus on promoting nonpartisan civic engagement and encouraging fans to make a plan to vote during midterm elections," the league said Tuesday.

All 435 U.S. House seats will be up for grabs on Nov. 8, along with more than 30 U.S. Senate seats and gubernatorial races.

"It's unusual. We don't usually change the schedule for an external event," James Cadogan, the executive director of the NBA's social justice coalition, told NBC, which first reported the league's Election Day schedule plan. "But voting and Election Day are obviously unique and incredibly important to our democracy."

The move is a rarity for the league, which typically plays no games on Thanksgiving and Christmas Eve and tries to avoid scheduling games on the day of the NCAA men's basketball championship game - often the first Monday of April. It also has a few days off built around the All-Star Game, which takes place in February.

The NBA and its players were openly involved in several election-related pushes in 2020, largely as part of the response after the deaths of George Floyd and Breonna Taylor reignited the quest to eliminate racial inequality and police brutality.

Many players, including LeBron James, were involved in voting registration drives and other get-out-the-vote initiatives. Some teams turned their arenas into registration or voting centers.

The NBA's full schedule for the season will be released Wednesday.

There are some sporting events in the U.S. scheduled for Nov. 8. The NHL has 11 games on Election Day this year, with eight of those in the U.S. And there are three FBS-level college football games being played on Nov. 8, all in the state of Ohio.

Major League Baseball's season should be over by Election Day; the latest possible date for the World Series, barring postponements, is Saturday, Nov. 5. The NFL hardly ever plays on Tuesdays - there have been seven games on that day of the week since 1948, six of them for coronavirus-related rescheduling reasons in the last two years - and has no games scheduled this year on Nov. 8.

"The NBA is creating a culture of political participation, which extends not only to its athletes but to fans as well," said Andrea Hailey, the CEO of Vote.org, which has partnered with the NBPA on various initiatives in recent years. "Players, coaches, event staff and fans all deserve to have the time and space to make their voices heard at the ballot box. The league is setting an important precedent that I hope other businesses and leagues will follow."