Lillard out at least 10 days with abdominal pain 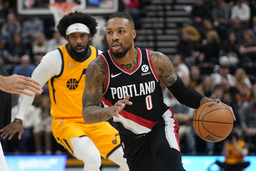 PORTLAND, Ore. (AP) Portland Trail Blazers guard Damian Lillard is out for at least 10 days because of lower abdominal tendinopathy.

Lillard missed Tuesday night's victory over the Detroit Pistons with the condition. An MRI confirmed the diagnosis, the Blazers announced Wednesday.

Lillard will be evaluated again in 10 days. He will miss at least four upcoming games.

The six-time All-Star is averaging 21.5 points and 7.8 assists through 20 games this season.

Portland forward Nassir Little is also out for at least one week with a left ankle sprain. Little was injured Monday against Utah.

Little has played in 21 games, including two starts this season, and has averaged 8.3 points and 5.3 rebounds.