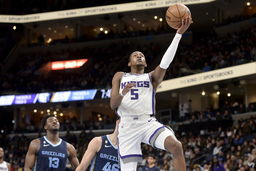 Kevin Huerter scored 18 points, hitting 6 of 10 from the field, including 4 of 7 from 3-point range. Malik Monk finished with 14 points as the Kings managed to hold on after leading by 14 midway through the fourth quarter. Fox also had six of Sacramento's 27 assists on 39 made baskets.

Ja Morant, returning after missing a game with a sprained left ankle, led Memphis with 34 points, six assists and seven rebounds. Jaren Jackson Jr. added 22 points and five blocks, and Dillon Brooks finished with 14 points as the Grizzlies lost their fourth of five.

"I missed. Game over," Morant said of the final free throws.

"It got really close," Jackson said. "I thought we did a good job at the end playing good defense. ... We were just playing really good defense. We had it."

Memphis' skid has come at a time when injuries have kept key players out of action.

Desmond Bane continued to be sidelined because of a sprained right big toe. Morant started after hurting his ankle Friday against Oklahoma City.

The game was close in the first half until the Kings built an eight-point lead with a second-quarter burst. Sacramento led 64-59 at the break.

Fox, named Western Conference player of the week on Monday, got rolling in the third, scoring 13 points as the Kings extended the lead to 88-76 entering the fourth.

They were thrilled to keep their winning streak intact.

"It feels good," said reserve Chimeze Metu, who finished with 10 points, making 5 of 7 shots. "Obviously, we don't want it to end. We just need to keep it going."

Kings: Fox recorded his 450th career steal in the second quarter. ... The seven-game winning streak is Sacramento's longest since 2005. ... Fox has five games with at least 30 points. ... Sacramento saw its string of six straight games scoring at least 120 points snapped.

The Kings have closed out several of their games during the streak with big runs - 18-5 against Detroit, 12-4 to defeat Brooklyn and 12-2 in a win over Golden State.

This time, Sacramento had to hang on late, but Brown was happy about his team's energy level.

"Guys start to feel the need to play with a sense of urgency defensively," Brown said. "So defensively, you can see the intensity at the end of the game compared to the flow of most of the game. It's not even close."

Kings: At Atlanta on Wednesday.