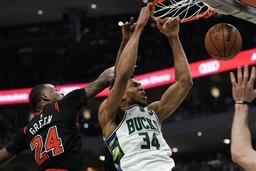 MILWAUKEE (AP) On a night when their usually potent offense was searching for answers, the defending champion Milwaukee Bucks had to rely on their defense in their playoff opener.

Fortunately for the Bucks, that's the one part of their game that was at a championship level.

Giannis Antetokounmpo had 27 points and 16 rebounds, and the third-seeded Bucks recovered after blowing a 16-point lead to beat the sixth-seeded Chicago Bulls 93-86 in Game 1 of their Eastern Conference first-round playoff series Sunday.

"We've got to win the ugly games," said Jrue Holiday, whose 3-pointer with 5:03 left put the Bucks ahead for good. "I feel like today was ugly. It was a battle and it was tough, but it was an ugly one."

Holiday's 3-pointer was part of an 8-0 run that gave the Bucks an 85-78 edge. The Bulls got the margin down to one but could never regain the lead, as Zach LaVine missed a potential tying 3-pointer from nearly 30 feet away with 29 seconds left.

"I thought it was a good shot," LaVine said. "We were down three. I got a really clean look."

Milwaukee overcame its struggles on offense by holding the Bulls to the lowest single-game point total of any Bucks opponent all season. The Bulls shot a season-low 32.3% from the floor in their first playoff appearance in five years. They were 7 of 37 on 3-point attempts.

"Every shot I took tonight felt good," said DeMar DeRozan, who scored 18 points but shot 6 of 25. "I guarantee you that me, Zach and Vooch (Nikola Vucevic) aren't going to miss that many shots again."

The Bucks, who have won 17 of their last 18 meetings with the Bulls, grabbed an early 32-16 lead and threatened to put this game out of reach early. But they struggled to score the rest of the way.

They finished with 21 turnovers. They scored just three points in the first 6 minutes, 57 seconds of the fourth quarter.

"The whole team was kind of out of rhythm," said Antetokounmpo, who didn't score in the fourth quarter while dealing with foul trouble. "We weren't able to find one another as easy as we usually find one another and make shots. We missed a bunch of open shots today. Usually we make those and we get energy."

The Bulls didn't take their first lead until late in the third quarter. They took their last lead at 78-77 on Vucevic's inside basket with 5:56 left before the Bucks scored eight straight points.

"We showed resiliency tonight," Lopez said. "Things didn't go our way offensively for a lot of the game, and we fought through it and did a good job defensively."

GOING BACK TO CHICAGO

With the two cities separated by only about 90 miles, the Bulls are heading back to Chicago after Game 1 before returning to Milwaukee for Wednesday's Game 2.

"If we would have had to play Sunday-Tuesday, I think we would have definitely stayed here," Bulls coach Billy Donovan said before the game. "But I think because we have two days, we have a chance to get home at a decent time, those guys can sleep in their own bed, practice tomorrow, practice Tuesday and then come back up."

Bulls: Caruso was in the starting lineup. Caruso had started just 18 of the 41 regular-season games he played. ... The Bulls were missing assistant coaches Chris Fleming and Damian Cotter, who had tested positive for COVID-19. "They're still in protocols right now with the league," Donovan said before the game. Donovan added that "they have never really been in a situation where either one of them has felt bad at all, so that's been a positive."

Game 2 is Wednesday in Milwaukee.