Irving, Durant lead Nets past Cavs in play-in for No. 7 seed 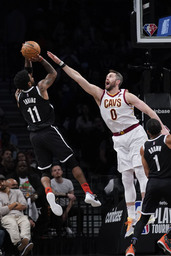 That's the next stop on a recent rise for the Brooklyn Nets, who were in 10th place not long ago but don't look like an underdog right now.

Kyrie Irving had 34 points and 12 assists, Kevin Durant added 25 points and 11 assists, and the Nets took the No. 7 seed in the Eastern Conference by beating the Cleveland Cavaliers 115-108 on Tuesday night in the play-in opener.

The Nets raced to a 20-point lead after one quarter and turned the Cavaliers away time and again to earn a matchup with No. 2 seed Boston in a series that begins Sunday.

"I know that team very well and they know us very well and it'll be a back and forth," said Irving, a former Celtics guard, "and once you throw that ball in the air, you're going to really see some spectacular basketball."

Irving made his first 12 shots before a 3-pointer rimmed out in the fourth quarter. He finished 12 for 15.

A preseason NBA Finals favorite who sputtered through a turbulent season and were in 10th place entering the last week of the regular season, the Nets have run off five straight wins. With Durant and Irving, they are far more dangerous than the usual No. 7 seed.

And both are willing to give the ball to teammates who are capitalizing when they get it. Bruce Brown had 18 points, nine rebounds and eight assists, while Andre Drummond scored 16 points.

Brown, who is from Boston, talked about how they can keep doing that against a Celtics team missing defensive anchor Robert Williams. Durant was aggravated when he heard that.

"It ain't going to be that easy, I'm going to tell you that," Durant said.

Unless the Nets play like they did in the first quarter.

The Nets made nearly 71% of their shots in the period - Irving and Durant combined to make all eight of theirs - and closed the period with a 15-3 spurt that made it 40-20. It was a bigger lead than Brooklyn had in any first quarter during the regular season.

"You can't give a team like Brooklyn that has championship aspirations and players who have won championships a 22-point lead," Cavs coach J.B. Bickerstaff said. "Again, give our guys credit for getting back in it. But that's damn near impossible to overcome."

Darius Garland scored 34 points for the Cavaliers, who have another chance to earn the No. 8 seed. They will host the winner of the Atlanta-Charlotte game on Friday, with the winner moving on to face No. 1 seed Miami.

Brooklyn and Cleveland both went 44-38 but the Nets clinched the tiebreaker by beating the Cavs at Barclays Center last Friday to finish 3-1 against them. Cleveland was confident it could come back to Brooklyn and win, though it was clear quickly just how difficult that would be.

"I always say about Kyrie in a March Madness, one-game type of situation, he's a tough guy to bet against," former Cavs teammate Kevin Love said. "Again, seen this movie before but still - I think that there's just times where he comes out and plays out of his mind and that's why he's a future Hall of Famer. So you just kind of have to tip your hat to him. He hit some really tough, contested shots today."

The Cavaliers, trying to extend a surprising season that saw them double their win total from a season ago, kept chipping away in the second half. But they would too often miss an open 3-pointer or give up an extra possession on an offensive rebound that the Nets would take advantage of.

Nic Claxton had 13 points and nine rebounds for Brooklyn.

Cavaliers: Rookie Evan Mobley scored 19 points and Love had 14 points and 13 rebounds. ... The Cavaliers remained without All-Star center Jarrett Allen because of a broken finger.

The Nets and the New York Liberty Foundation announced before a moment of silence that they were donating $50,000 to help those who were injured after at least 10 people were shot on a subway Tuesday. The shooting occurred at the subway stop closest to the Nets' training facility.

Nets coach Steve Nash said Ben Simmons is moving better and doing more shooting, but there still was no timetable for when he could finally play for the Nets. Simmons, who sat on the bench wearing a matching green jacket and shorts, has battled back problems since not long after being acquired from Philadelphia in February.

"So definitely positive signs, improving and moving and all those things, but like I said he hasn't been running full speed or playing against anybody," Nash said. "So still a lot of markers to meet."

Bickerstaff said Allen, who came to Cleveland from the Nets in a trade last season, did individual drills the past two days, when the team's focus at practice had to be on the available players to get ready for Brooklyn.

"He's doing well," Bickerstaff said. "He's working out; he's starting to do more with both hands. We're just kind of in a wait-and-see."