Warriors hold off Spurs and maintain hold on third seed 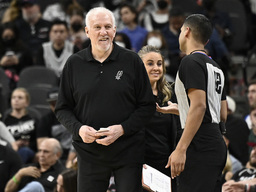 SAN ANTONIO (AP) Jonathan Kuminga and Jordan Poole each had 18 points and the Golden State Warriors won their fourth straight, beating the San Antonio Spurs 100-94 on Saturday night to strengthen their hopes for a top-three seed despite being without Stephen Curry and Klay Thompson.

Poole finished 3 for 19 from the field but made all 11 free throw attempts, including eight in the fourth quarter. He also had eight assists and only two turnovers in 34 minutes.

"He was laboring out there," Warriors coach Steve Kerr said. "I was really proud of him. There are going to nights like that in this league for guys who handle the ball and have that kind of responsibility and score a lot of points. There are nights when the ball doesn't go in the hoop and it's just so important to keep playing and keep fighting. I thought he made huge plays down the stretch."

Golden State is a game ahead of Dallas in the Western Conference and can secure the third seed with a victory Sunday at New Orleans in the season finale. If the Warriors lose, and the Mavericks beat the Spurs on Sunday, Dallas will finish third after going 3-1 in its season series with Golden State.

San Antonio will finish 10th in the Western Conference and must travel to ninth-seeded New Orleans for the opener of the play-in tournament Wednesday.

Lonnie Walker IV had 24 points to lead the Spurs. Walker was the only San Antonio player in double figures through the first 39 minutes. Tre Jones finished with 15 points, Josh Primo had 14 and Josh Richardson added 10.

After the Spurs pulled within two points with two minutes remaining, Poole made a pair of free throws with 47.9 seconds to put Golden State up 98-94 remaining after Jones missed a running layup.

"Draymond was great tonight," Kerr said. "I thought he was the best player on the floor. His energy, his rebounding, his distribution of the ball. His energy was great. He just came out ready to play."

While the Warriors without their starting backcourt, the Spurs were without their entire starting lineup of Dejounte Murray, Keldon Johnson, Jakob Poeltl, Devin Vassell and Doug McDermott.

Those absences led to a low-scoring affair with the teams combining to score 44 points in the opening quarter. The Spurs scored 36 points in the first quarter of each of their three previous games against the Warriors.

After trailing by as many as 17 points, the Spurs closed to 78-71 on a 3-pointer by Primo as time expired in the third quarter. A 3-pointer by rookie forward Joe Wieskamp and a 15-foot jumper by Primo cut the Warriors' lead to 86-84 with 6 1/2 minutes remaining.

Primo finished 5 for 13 from the field.

"Definitely had a tough stretch, a tough first half," Primo said. "Had trouble getting it going. Had some turnovers early, but I just had to keep my head. The team is really good about telling me to keep my confidence."

Fellow rookie Kuminga also had a standout game for the Warriors, finishing 6 for 8 from the field.

"Just coming out there whenever your name gets called," Kuminga said. "Go out there and contribute and help your team to get the win. I think that's what it's all about."

Warriors: Golden State sat Thompson for the fourth straight game as part of the injury management for his right Achilles' tendon, which he had surgery on in November 2020. Thompson was crisply working out and shooting prior to the game with no discomfort. . Curry remains out with a sprained left foot. The two-time MVP has not played since suffering the injury March 16 against Boston.

Spurs: San Antonio honored former owner Red McCombs during the game's first time out. McCombs was member of the original ownership that bought the ABA's Dallas Chapparals and brought them to San Antonio in 1973. He sold his interest in the Spurs in 1978 and later owned the Denver Nuggets from 1982 to 1985. McCombs returned to the Spurs in 1988 to become the team's majority owner at a time when the franchise's future in San Antonio was in question. . Murray sat out for reconditioning after missing four consecutive games with a non-COVID-19 upper-respiratory illness.

The Warriors are still expecting Curry to be able to play when the playoffs open. Curry will not play in Sunday's finale as he continues to rehabilitate a sprained left foot.

"I don't know over the last couple of days (how Curry is progressing), but everything up until two days ago, the last time that I talked to him, everything has been on schedule," Kerr said. "And since I haven't heard from them, I assume it's still (on schedule)."

Spurs: At Dallas on Sunday night.