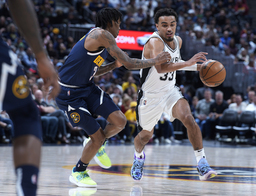 DENVER (AP) Devin Vassell and Keldon Johnson each scored 20 points to help the San Antonio Spurs secure a spot in the play-in tournament Tuesday night following a 116-97 victory over the Denver Nuggets.

A little while after San Antonio won, the Spurs locked up at least the 10th seed in the Western Conference when the Los Angeles Lakers were eliminated from the playoff race with a loss at Phoenix.

Not that the Spurs were really thinking about it. Or at least coach Gregg Popovich wasn't.

"We've got a game on Thursday and we're going to play that," Popovich said. "Not worry about anything else. It's not like we're world beaters."

Reigning MVP Nikola Jokic had 41 points and 17 rebounds for the Nuggets, who squandered a chance to clinch a playoff spot with a win after Minnesota lost to Washington.

"It's a bad loss for us," said Gordon, who had 18 points and 13 rebounds. "We just didn't take advantage of the opportunity that was presented to us and it's frustrating, but we know we have two games left. Our focus is on that just now."

The Spurs had six players score in double figures as they won a regular-season game in Denver for the first time since Jan. 5, 2017. But it wasn't easy even after San Antonio built a lead that stretched to 21 late in the second quarter.

The Nuggets cut it to four early in the fourth, only to see the Spurs go on a 14-2 surge to regain momentum. One of the key plays was when Davon Reed tried to make a behind-the-back pass that was stolen by Tre Jones, who went in for a layup. Jones finished with 14 points and 10 assists.

"Every team has nights like that and I think this was one of those for the Nuggets," Popovich said. "Nothing went right for those guys, even to start the game. ... We took advantage of it.

"So I think for them it was one of those nights, but I was really happy with our aggressiveness the whole game."

The Nuggets fell to sixth in the Western Conference, a half-game behind Utah and two games in front of the seventh-place Timberwolves. Denver can wrap up a top-six seed and avoid the play-in tournament with a Minnesota loss or by winning one of its final two remaining home games.

Malone was given a technical in the second quarter for arguing a call with official Tony Brothers.

It came almost a week after Austin Rivers was ejected by Brothers when the guard faked throwing an elbow on Indiana's Lance Stephenson. Malone said Brothers told him it was a malicious act by Rivers.

Jokic later picked up a technical in the second half as well - not from Brothers.

Spurs: G Dejounte Murray didn't play due to a respiratory illness. ... It was San Antonio's fifth straight road win. ... Josh Richardson had 18 points and four 3-pointers. Vassell and Richardson were a combined 8 of 11 from 3-point range.

Nuggets: G Jeff Green (personal reasons) was a late scratch. ... Rivers had a basket overturned when officials later determined he stepped out of bounds.

Asked the best way to contain Jokic, Popovich responded: "I don't think anybody has figured that out. He's a great one."

Malone had a simple explanation: "That he is fatigued. He's been carrying a team for 80 games, and I can't take him out of the game."

At 22-17, the Nuggets haven't been as dominant at home this season. On the road, though, they've won a franchise-best 25 games.

"Can't explain it. I really can't," Malone said of the struggles at Ball Arena.

Malone didn't rule out a possible return of forward Michael Porter Jr. (back) and point guard Jamal Murray (knee) at some point.

"Yes, you have that in the back of your mind. We could get reinforcements," Malone said. "But you also have to help the guys that are ready and available to play."

Spurs: At Minnesota on Thursday.