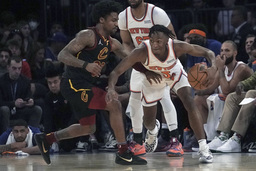 NEW YORK (AP) Darius Garland had 24 points and 13 assists to lead the Cleveland Cavaliers to a 119-101 win over the New York Knicks on Saturday.

Caris LeVert finished with 19 points. Moses Brown and Isaac Okoro each added 16. Brown also had 13 rebounds. Kevin Love had 15 off the bench. Cedi Osman and Lauri Markkanen both added 10 for Cleveland.

"We're starting to put something together," Garland said.

Obi Toppin scored a career-high 20 points. Evan Fournier had 19. Immanuel Quickley scored 17 off the bench. RJ Barrett finished with 12, and Alec Burks had 11 for New York.

"We lost today so it really doesn't mean anything to me," Toppin said about his career day. "We (have to) learn from today and just get better and win these next couple games."

The Cavaliers never trailed in sweeping the regular-season series. Cleveland shot 54.3% from the field (44-for-81) and 44.1% from 3 in the matinee at Madison Square Garden.

"We finally made some shots," Garland said.

But the Knicks were unable to score a go-ahead basket at any point. And Cleveland took every opportunity to build on its advantage including a 57-second sequence in the third quarter.

Barrett made one of two free throws to cut the deficit to 80-74. The Cavaliers responded with an Okoro tip-in, an Okoro 3, and a spectacular two-handed dunk from Brown to push the lead to 13.

The spurt increased into an 22-11 quarter-ending run, allowing Cleveland to enter the fourth with an 102-87 advantage.

"It was definitely something we talked about within the huddle in that second half," Love said of the Cavaliers ability to put the game away. "When we got up we said we (didn't have to) stop and let's continue to make the right play; play for each other."

Osman's four-point play with 9:28 left put the game away.

"They have a lot of guys who can stretch the floor," said Quickley. "We didn't play our best."

Cavaliers: With slightly more than a week remaining in the regular season, the Cavaliers are in the midst of a playoff race. Entering the day, Cleveland was seventh in the East which places them amongst the teams in the play-in mix. "It's obviously a step forward for us," Cavaliers coach J.B. Bickerstaff said before the game.

"No matter what team has been built (and) how long they've sustained success, they've had to go through this process and they've gone through the process of being heartbroken and learning through disappointment."

When asked specifically how he thought his team was handling being in a playoff push, Bickerstaff said he believed they were "handling it well."

Knicks: New York star forward Julius Randle missed the game with an injured quadriceps, and coach Tom Thibodeau said before the game it is "most likely he will be out the rest of the way." Randle, 27, averaged 20.1 points, 9.9 rebounds, and 5.1 assists in 72 games this season. "He's had this nagging thing going on for awhile," he said.

Thibodeau said Randle will not travel with the team to Orlando for Sunday's game against the Magic. Following Sunday, New York will have three games left in what has been a disappointing season.

"Most likely where we are, just let him get healthy and go from there," Thibodeau said.