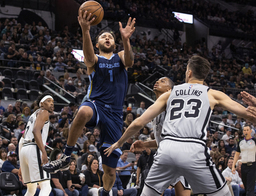 SAN ANTONIO (AP) Tyus Jones scored 25 points and the Memphis Grizzlies edged the San Antonio Spurs 112-111 on Wednesday night to capture the Southwest Division title and clinch the No. 2 seed in the Western Conference.

The Grizzlies claimed their first division title in franchise history and accomplished the feat with All-Star point guard Ja Morant watching from the sidelines.

"Definitely a big milestone," Grizzlies coach Taylor Jenkins said. "I told the group, a special accomplishment for a special group, but we've got more work to do."

Memphis never trailed, even as Morant missed his sixth straight game with a sore right knee. The Grizzlies improved to 19-2 without Morant this season.

The loss halted San Antonio's four-game winning streak, the Spurs' longest of the season. They dropped a half-game behind the Los Angeles Lakers for 10th in the West and the final berth in the play-in tournament.

San Antonio closed within a point, at 112-111, on a tip-in by Keldon Johnson with 27.8 seconds remaining. Following a miss by the Grizzlies' Desmond Bane, Johnson missed a layup contested by Bane with 2.7 seconds remaining.

"What a brilliant (play call)," Jenkins said. "They probably knew that we were going to switch before. They got exactly what they wanted, a shot right at the rim. It just didn't go in."

Jenkins said it was "stressful" matching basketball wits with San Antonio coach Gregg Popovich, who he considers a mentor. Jenkins spent six seasons with the Spurs, including head coach of their G League affiliate.

Memphis withstood San Antonio with a balanced effort, as it has done for much of the season.

The Grizzlies had five players score in double figures and shot 48% (44 for 91). Dillon Brooks scored 21 points and Bane and De'Anthony Melton each added 16.

Consecutive 3-pointers by Murray and Lonnie Walker IV and a video review that disallowed a basket by Jarren Jackson Jr. cut Memphis' lead to 93-86 entering the fourth, the first time San Antonio was within single digits in the second half. The Spurs scored the first five points of the fourth, pulling within 93-91 and setting up the tense final seconds.

"I was really proud of them," Popovich said. "But I am proud of them, it was great. Good stuff. Great growing experience for them against a hell of a team. Like I said before, Taylor and his staff have done a fantastic job. That team competes hard, they execute really well, maybe better than most anybody in the league, so that is a fine performance for us tonight."

Jackson scored the game's first five points, including his only 3-pointer. The Grizzlies and Spurs were a combined 10 for 23 on 3-pointers in the opening quarter.

With Memphis having the weekend off, Jones is considering traveling to New Orleans on Saturday to see Duke play North Carolina in the Final Four.

Jones played for the Blue Devils under Mike Krzyzewski, who is retiring at the close of the tournament after 41 seasons as the team's head coach.

The fact that Duke is facing rival North Carolina for the first time in the NCAA Tournament only makes this moment more meaningful for Jones and the Blue Devils.

"It's kind of fate that the first time ever playing UNC would be in his last year in the Final Four with the chance to go to the championship game," Jones said. "Everything lines up. I'm excited for him."

Grizzlies: Morant was shooting 3-pointers minutes before pregame warmups after his teammates had left the court. Morant didn't show any signs of discomfort during his workout. He was bounding around the court as he attempted numerous half-court and three-quarter court shots before sprinting off the court. . Jackson played 25 minutes after being a game-time decision because of a sore right thigh. . Jones injured his left hand in the first half after the ball bounced back and jammed his fingers. He returned in the third quarter with his middle and ring finger taped together. . Memphis' bench averages a league high 98.5 minutes per game.

Spurs: San Antonio has lost six straight to Memphis and five straight at home. The Spurs last home victory against the Grizzlies was Jan. 5, 2019, and their last win overall as Dec. 23, 2020. . Walker had six points and played 14 minutes in his return from a four-game absence. Walker injured his back March 18 after a blind screen from Willy Hernangomez on March 18.