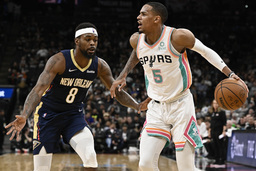 Jonas Valanciunas had 16 points and 12 rebounds and Jaxson Hayes added 16 points for New Orleans, which moved 2 1/2 games ahead of San Antonio for the 10th and final playoff spot in the play-in tournament. The Pelicans won for just the second time in seven games.

"We're proud of them," New Orleans coach Willie Green said. "Anytime you can come into this arena, this building with the history that's here no matter what Spurs team you play against, you know they are going to play hard, they are going to play together and they're not going to beat themselves. To come into this building and get a win is a huge confidence booster for us going forward.

New Orleans was without leading scorer Brandon Ingram but had six players score in double figures and had three others score at least seven.

Devin Vassell had 18 points and Dejounte Murray had 17 for the Spurs.

New Orleans came out swinging, essentially scoring an early knockout as Valanciunas had nine points as part of a 14-4 run to open the game. The Pelicans expanded that lead to 30-7 off three consecutive turnovers by the Spurs.

"They were hungry," Vassell said. "They came out with the first punch. We came out flat."

New Orleans closed the first quarter up 35-10. It was the lowest production in any quarter for San Antonio this season. The Spurs were 4 for 21 from the field while the Pelicans were 5 for 11 on 3-pointers alone.

"Once we just all started seeing shots go in and just playing good defense and getting steals, we all just started getting hyped," Hayes said. "Especially once we started getting the steals. Once we start doing good on defense, then our offense just starts rolling automatically."

New Orleans closed the game shooting 50 percent from the field and were 14 for 34 on 3-pointers.

Adding injury to insult, the Spurs also lost Lonnie Walker IV to back spasms on a screen from Willy Hernangomez with 2:29 remaining in the opening quarter.

San Antonio coach Gregg Popovich attempted to stunt the domination with two early timeouts and then forced an ejection 2 1/2 minutes into the second quarter by arguing with official Bennie Adams.

Pelicans: New Orleans F Brandon Ingram missed the game with a sore right hamstring. Coach Willie Green is unsure if Ingram will join the Pelicans during their three-game road trip. "He wasn't feeling well before we left, so we kept him at home," Green said. ... Devonte' Graham and Jose Alvarado both played after being listed as questionable. Graham played 21 minutes despite having a sore right hip. Alvarado, who has a right finger laceration, played 22 minutes.

Spurs: Walker was helped to the locker room after taking a heavy blow to the shoulder and back by Hernangomez on a screen. Walker fell to the court immediately clutching his lower back and pounded the floor with 2:29 remaining in the first quarter. ... Rookie G Josh Primo made his fifth career start. ...0 The Spurs' previous low was 19 points in the first quarter and 12 points in any quarter. ... Popovich was ejected after arguing that Alvarado stepped out of bounds prior to a shot-clock violation. Adams hit Popovich on the side of the head signaling the violation, but Popovich was already upset by the missed call. The veteran coach screamed and pointed at Adams in picking up the first technical and was ejected as his assistants held him from charging at Adams. Popovich winked as he exited the court.

As he exited the room, Popovich had some fun revisiting the question.

"I'm going to go watch some film on Herb," Popovich quipped. "I'll get back to you on it."

The room erupted in laughter as Popovich smiled.

"I'm not being (sarcastic)," Popovich said. "People ask me that for years. They'll say, `What do you think of so and so on our team,' and I'll say, `I don't know. I didn't watch any film.' `You didn't watch any film on the game tonight?' No, it's basketball. We all do the same stuff. You run pick and roll, you've got to get back on defense, you want to rebound, you want to make shots. How hard is that? It's just who does it better for more minutes."

Pelicans: At Atlanta on Sunday night.