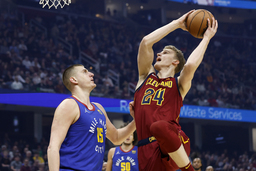 CLEVELAND (AP) Lauri Markkanen made the go-ahead 3-pointer with 29 seconds left in overtime and scored a season-high 31 points, leading the Cleveland Cavaliers to a 119-116 victory over Denver on Friday night that snapped the Nuggets' franchise-record road winning streak at seven.

Reigning MVP Nikola Jokic scored in the paint to cut Cleveland's lead to 117-116 with 25 seconds remaining, but rookie Evan Mobley dunked over Aaron Gordon to restore the Cavaliers' three-point advantage. Bones Hyland missed a 3-pointer as time expired, completing Cleveland's comeback from 14 down in the fourth quarter.

"That's our team all year, we keep fighting and no one puts their heads down," Markkanen said. "It shows the heart and the competitors we have here. We know every night is a huge game and we've got to give our best. The crowd kept us going and it was a great win."

Mobley scored nine of his 27 points in OT and had 11 rebounds for the Cavaliers, who moved one game in front of Toronto for sixth place in the East. All-Star Darius Garland had 25 points and 14 assists, and Markkanen added 10 rebounds and four steals.

"We know what's going on around the league, so yeah, we know what happened to Toronto (a 128-123 OT loss to the Lakers)," Garland said. "Lauri was great and this guy right here, Evan Mobley, is a 7-foot unicorn who can do anything."

Jokic had 32 points, 10 rebounds and eight assists, but committed a turnover and missed a shot in the final 1:40 of the extra period. Denver, which has won 12 of its last 16 overall, lost on the road for the first time since Feb. 11 at Boston.

"It seems like we did a little bit of everything wrong at the end," Jokic said. "We didn't do a good job defensive rebounding, especially me, and my last pass was bad. Really bad. I made a mistake."

The Nuggets held the largest lead of the night at 92-78 with 10:29 left in the fourth quarter, but Cleveland outscored them 29-15 in the rest of regulation. Jokic's driving layup with 44 seconds left sent the game to OT tied it at 107.

"Bones has been playing at a very high level, so I stuck with him down the stretch," said Denver coach Michael Malone, whose team is sixth in the West. "That was a great look he got at the end. It just didn't go in."

Nuggets guard Jamal Murray (left knee surgery), who has not played this season, spent two days practicing with their G League affiliate in Grand Rapids this week. It was his first five-on-five action since tearing his left ACL last April 12 at Golden State. "That was a huge step for Jamal, but he still has a lot of work to do," Malone said.