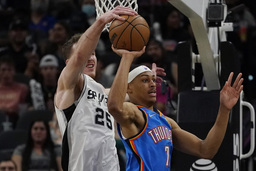 SAN ANTONIO (AP) Dejounte Murray had 26 points and 12 assists and the San Antonio Spurs held on to beat the Oklahoma City Thunder 122-120 on Wednesday night, snapping a two-game skid.

Lonnie Walker IV made a 3-pointer with 1.8 seconds remaining as San Antonio salvaged a victory after blowing a 16-point lead in the third quarter.

"Once I touched it, I was going to let it fly, regardless," Walker said. "Even if I had the starting five and the referees on me, it was going up."

The Spurs had a season-high 19 3-pointers in handing the Thunder their seventh straight loss.

Shai Gilgeous-Alexander, who had 34 points to lead Oklahoma City, missed a 3-pointer from the left corner as time expired.

Thunder forward Aleksej Pokusevski had five points in the final 2:18, including a layup with 4.8 seconds remaining that put the Thunder up 120-119.

"I thought we showed great poise," Oklahoma City coach Mark Daigneault said. "We played really well, and obviously we were one play away."

San Antonio is 3-3 heading into the finale of a seven-game homestand Friday night against New Orleans. The Spurs are 1 1/2 games behind the Pelicans for 10th and the final berth in play-in tournament.

Oklahoma City battled to the buzzer even without Josh Giddey and Derrick Favors in addition to previous season-ending injuries to Luguentz Dort, Mike Muscala and Ty Jerome.

"(The Thunder) moved better than we did," San Antonio coach Gregg Popovich said. "They were more aggressive. We made 3s, and it bailed us out, but we were not bailed out by good basketball."

Oklahoma City took its first lead at 109-106 with 8 minutes remaining on Vit Krejci's 3-pointer. San Antonio responded with a 6-0 lead before exchanging the lead in the final minutes.

"The execution was really good down the stretch," Daigneault said. "The fourth quarter of the game, I thought we played really well. Executed on both ends, played with great intensity and connectiveness. It wasn't perfect, but I thought those guys did a really good job."

The Spurs established a reputation as one of the league's premier defenses annually under Popovich, but the league has changed drastically since San Antonio won its first championship in 1999.

Holding teams under 100 points is rare now with so many dynamic scorers and league rules seemingly skewed toward offense.

"Teams are getting 28, 32 points a quarter and that kind of thing," Popovich said. "I used to get on their butts, and we'd say `22 (points) is it.' If they score over 22, we're in trouble. Twenty-two every quarter, that's our goal. Now, that would be a ridiculous comment to make to your team. It doesn't matter how good a defensive team they are; it's not happening, as an average. If you get one of those kinds of quarters, you go, `Hey, that's pretty cool.' That's just the way the game is played now."

Spurs: San Antonio has won 2,400 games combined in the NBA and ABA since the franchise relocated from Dallas in 1973. ... Spurs F Doug McDermott is expected to miss the remainder of the season after an MRI revealed a grade 3 right ankle sprain. McDermott suffered the injury Saturday against Indiana. He averaged 11.3 points and shot 42 percent on 3-pointers in his first season with the Spurs after signing as a free agent during the offseason. . Popovich walked directly to former Spurs star Tony Parker, who was sitting courtside, shortly after the national anthem. The two hugged and spoke briefly before Popovich went to the bench in preparation for tipoff. Parker helped the Spurs win four NBA championships during his 17 seasons with the franchise and was named Finals MVP in 2007.

Thunder: At Miami on Friday night.