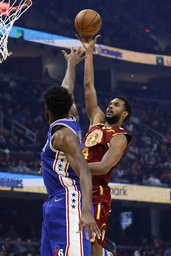 Embiid was a game-time decision with a sore back, but showed no signs of the injury on his 28th birthday. The All-Star center and MVP candidate shot 13 of 19 from the field, including 1 of 3 from 3-point range, and was 8 of 10 from the foul line while adding five assists in 35 minutes.

"We got a win we had to have and I'm feeling great," Embiid said between sips of fruit punch from his postgame celebration. "It's the NBA season. None of us feel good at this point. We need to keep playing the same way."

Darius Garland had 22 points and seven assists for the Cavaliers, who lead Toronto by a half-game in the race for sixth place in the Eastern Conference. All-Star center Jarrett Allen missed his fifth consecutive game with a broken left finger.

Cleveland, which trailed by 17 in the second quarter, took a 104-103 lead on a 3-pointer by Lauri Markkanen with 3:47 remaining. Harden answered with a pair of free throws 27 seconds later to put the 76ers in front for good.

Tyrese Maxey's 3-pointer extended Philadelphia's lead to 110-106 with 1:19 left, and Harden and Maxey combined to make 6 of 6 free throws in the final 20 seconds to lock up the win. There were seven lead changes and four ties in the fourth quarter.

"It's a real cool sight to see teams double-teaming James, so it makes it easier on Joel," said Maxey, who scored eight of his 25 points in the fourth. "If you let them play a two-man game, they're pretty hard to beat. That should be tough for teams."

Isaac Okoro scored 17 points and Evan Mobley added 13 points and nine rebounds for Cleveland. Caris LeVert had 15 points and seven assists in his second game back from a sprained right foot.

The 76ers built a 52-35 lead midway through the second, then carried a 72-59 advantage into the break behind 20 points, 11 boards and four assists from Embiid. Tobias Harris had 16 of his 19 points in the opening half.

"Offensively, we didn't have a lot of hiccups," Philadelphia coach Doc Rivers said. "And when it became a free throw contest late, I felt pretty confident because we've got a great free throw shooting team."

The 76ers and Cavaliers are lined up to meet in the first round of the playoffs, but Bickerstaff said it's "way too early to look at that with (13 regular-season games) left." Rivers praised the job Bickerstaff has done in cultivating chemistry. "The Cavs play together and they like each other, which is rare for a young team," Rivers said. "That jumps right out when you watch them."

76ers: Harden has 205 points and 95 assists in nine games since being acquired from Brooklyn on Feb. 10. "My playmaking is always going to be there, so it's just about trying to find opportunities for myself and my new teammates," Harden said. "It's all about winning time for me." ... Two-way G Myles Powell, C Charles Bassey and G Jaden Springer are on G League assignments with the Delaware Blue Coats.

Cavaliers: F Dean Wade (right knee soreness), who has started 28 games, missed his second straight. Bickerstaff said Wade was able to manage the injury until it became too painful to play. ... G Rajon Rondo (right ankle sprain) was inactive and has sat out 13 games with various right leg issues after being traded by the Lakers on Jan. 3. ... Cleveland plays eight of its final 13 games at Rocket Mortgage FieldHouse.