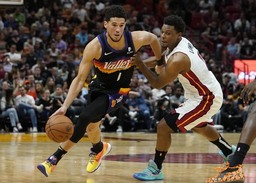 MIAMI (AP) Not that there was any doubt about this, but the Phoenix Suns are going to the playoffs.

The Suns didn't leave any doubt in a matchup of conference leaders, either.

Devin Booker scored 23 points, Mikal Bridges added 21 and the Suns shook off a slow start to beat the Miami Heat 111-90 on Wednesday night - becoming the first team this season to clinch a postseason berth.

"I told the guys it was one of the best defensive performances I've ever seen," Suns coach Monty Williams said. "I've been around for a little bit."

Booker, returning from a four-game absence for virus-related issues - he said he was asymptomatic and didn't have any problems - flirted with a triple-double, finishing with nine assists and eight rebounds.

His first trip to the playoffs last season ended with a loss in the NBA Finals. He's looking for a bit more this time.

"We know what we're working for," Booker said.

Phoenix improved the NBA's best record to 53-13, and the reigning Western Conference champion Suns have now beaten all other 29 teams this season - the first time they've done that since 2006-07.

The Suns also avenged a 23-point loss to Miami in January.

"I'm sure they remembered that," Heat coach Erik Spoelstra said. "They wanted to really make a statement tonight. They just outplayed us."

Coming off a victory Tuesday night at Orlando, Phoenix improved its NBA-best road mark to 25-6. The Suns have an 8 1/2-game lead over Memphis and are nine games ahead of Golden State and East-leading Miami.

Deandre Ayton had 19 points on 9-for-10 shooting and 10 rebounds for the Suns, who got 11 points and 15 rebounds from JaVale McGee, and 11 points apiece from Jae Crowder and Cameron Payne.

Duncan Robinson scored 22 points for Miami, which lost for just the third time in its last 15 games.

"They were first to the ball a lot," Robinson said about the Suns. "They were the aggressor. ... Unacceptable."

Bam Adebayo and Tyler Herro each scored 17 for the Heat, which played without Jimmy Butler (sinus congestion) and lost key reserve Caleb Martin midway through the second quarter to a hyperextended left knee. The Heat expect to know more Thursday.

The Suns were down by 11 early, took a two-point lead at the half and then outscored Miami 34-19 in the third quarter to blow matters open. Booker capped the quarter with a long 3-pointer, the Heat went 1 for 8 in the quarter from beyond the arc and it was 91-74 going into the final 12 minutes.

"He was ready," Bridges said about Booker's return.

Miami came out flying, scoring 25 points in the first 6 minutes - a burst fueled by five 3-pointers. The Heat were 9 for 12 from the floor in that stretch, 5 for 6 from 3-point range and finished the burst by making seven consecutive shots.

That's when Phoenix's defense showed up. The Heat were 5 for 27 on 3s the rest of the way. An 18-7 run by the Suns pushed the margin to 80-65 late in the third and the lead eventually swelled to 27 in the fourth.

"We wanted to make a statement here," Booker said.

Suns: Phoenix outrebounded Miami 55-38. ... The Suns need to go 10-6 in their final 16 games to post the best regular-season record in franchise history. The Suns were 62-20 in 1992-93 and 2004-05. ... Crowder got introduced last among Phoenix's starters, a tribute Miami often gives former Heat players to ensure they get a proper and warm welcome. The fans obliged. ... Phoenix improved to 5-3 without Chris Paul (fractured thumb).

Heat: It was the 21st game Butler has missed this season; Miami is 13-8 without its highest-paid player. ... Victor Oladipo, in his second game back after 11 months away recovering from leg surgery, had four points in 16 minutes. Don't expect changes to Oladipo's minutes allotment anytime soon, Spoelstra said. "I'm going to give that same answer for a while," he said. ... Miami fell to 4-14 when scoring 102 points or less. When the Heat score 103 or more, they're 40-9.

The Suns missed eight shots - on one possession. Crowder missed a 3-pointer with 9:39 left in the second quarter, Aaron Holiday then missed a layup and McGee missed two putbacks and a tip-in try before the ball was batted out of bounds by Miami. Landry Shamet tried a corner 3, had it blocked, got the rebound, then tried a layup and got that blocked out of bounds. Finally, Crowder was way off on another 3-point try, and Miami finally secured possession.

Heat: Host Cleveland on Friday nigh.