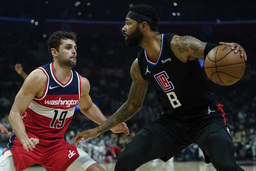 Jackson scored 31 points and assisted on Nicolas Batum's go-ahead 3-pointer with 31.2 seconds remaining as the Clippers scored the final 11 points in a 115-109 victory over the Wizards.

"We stayed resilient and kept our cool," said Jackson, who was 12 of 21 from the field and also had seven assists in 39 minutes. "We played through missing a few shots and found a way to get some stops."

Los Angeles held Washington scoreless over the last 2:37, and Jackson's two free throws with 12.3 seconds left to put the Clippers up by four.

The Wizards have blown leads to lose both of their meetings against Los Angeles this year, although this hole wasn't as deep as the previous meeting. The Clippers rallied from a 35-point, first-half deficit to defeat the Wizards 116-115 on Jan. 25, the second-best comeback in league history.

Jackson reached 30 points for the third time this season, including twice in the past four games. The 10-year veteran guard has emerged as the Clippers' leader with Paul George and Kawhi Leonard sidelined most of the season with injuries.

"He loves those moments down the stretch, whether it is taking the big shot or making that corner pass to Nico for the 3," coach Tyronn Lue said. "He's been big for us. He can get worn down, but we're trying to do something special and stay afloat. This was one of those games where we needed 39 minutes from him."

Kristaps Porzingis, acquired in a trade from Dallas last month, had 19 points in his second game with the Wizards. Rui Hachimura had 18, and former Lakers players Kyle Kuzma (17) and Kentavious Caldwell-Pope (16) had solid games in their return to LA.

Washington trailed 70-69 midway through the third quarter before going on a 16-5 run with 1:13 remaining. The Clippers responded by scoring the last eight points of the quarter, including back-to-back 3-pointers by Kennard to pull within 85-83 going into the final 12 minutes.

The Clippers eventually took a 100-95 advantage before the Wizards countered with a 14-4 rally, including eight straight points to close the run up 109-104 with 2:37 remaining.

"We were aggressive early. We scored quite a bit in the paint, but we stagnated a bit in the second half and they made plays. It's a tough one," Washington coach Wes Unseld Jr. said.

The Clippers have won their last 14 home games against the Wizards, the longest home winning streak against one team in franchise history.

They previously beat the Jazz in 13 straight home games from 1976-81 when the franchise was based in Buffalo and San Diego.

Wizards: Daniel Gafford (14 points, 10 rebounds) had his seventh double-double of the season. Raul Neto added 12 points. ... Washington was 10 of 27 beyond the arc after shooting 44.9% the past five games.

Wizards: Remain in Los Angeles to face the Lakers on Friday.

Clippers: Begin a three-game road trip against the Atlanta Hawks on Friday.