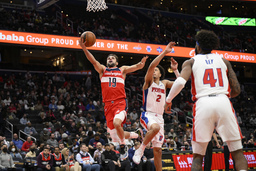 It's the longest home winning streak against any team in franchise history. The Wizards pulled within a game of idle Charlotte for 10th place in the Eastern Conference.

Jerami Grant scored 26 points for Detroit, which had a chance to tie on its final possession. Saddiq Bey missed from the perimeter, and after an offensive rebound, Killian Hayes missed a 3-pointer.

The Pistons rallied from a 12-point deficit in the fourth quarter, tying the game at 104 on Bey's two free throws with 3:37 left. Washington answered with six straight points. Kuzma gave the Wizards the lead back with two free throws, then Kentavious Caldwell-Pope added a layup.

After Kuzma blocked Cade Cunningham's layup attempt, Bryant threw down an alley-oop dunk at the other end.

"That was a big one for us and a big dunk for me, so I was really happy about it," Bryant said. "Just seeing that defensive play that Kuz made right then and there, to get that block for us, to get us out there in transition, really helped us."

Detroit again fought back within one, but Cunningham was called for a foul and replay upheld it. That sent Kuzma to the line with 35 seconds left, and he made both shots. After a follow shot by Isaiah Stewart made it 114-113, Tomas Satoransky made two free throws for Washington.

The Pistons led 85-79 near the end of the third quarter after a 9-0 run capped by Grant's 3-pointer. Washington then scored the game's next 18 points.

"That was the disappointment of the night," Detroit coach Dwane Casey said. "Just didn't have the defensive intensity, nor could we score on the other end."

Rui Hachimura made consecutive 3s to tie it, and a dunk by Bryant gave the Wizards an 87-85 lead at the end of the quarter. Washington then scored the first 10 points of the fourth. Another 3-pointer by Hachimura put the Wizards up 97-85.

"He's confident in his shot. He works on it," Washington coach Wes Unseld Jr. said. "He's shot ready, he spaces correctly. When you do those two things, the ball finds you."

Pistons: Detroit had a chance to win four of five for the first time all season but came up short. ... The Pistons shot 2 of 13 from 3-point range in the second half and 8 of 27 for the game. ... Cunningham had 20 points, including an impressive dunk along the baseline in the third quarter.

Wizards: Caldwell-Pope scored 15 points against the team that drafted him.

Pistons: At Toronto on Thursday night.