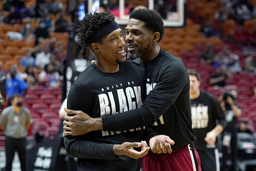 MIAMI (AP) Gregg Popovich is going to have to wait at least a couple more days before tying the NBA record for regular-season victories.

The starting center from his Olympic gold-medal-winning team at the Tokyo Games saw to that.

Bam Adebayo - who played for Popovich last summer with USA Basketball - scored a season-high 36 points, Tyler Herro added 27 off the bench and the Miami Heat overcame an early 16-point deficit to beat the San Antonio Spurs 133-129 on Saturday night.

Jimmy Butler scored 27 points in 30 minutes to help Miami improve the Eastern Conference's best record to 40-21. Butler didn't play in the fourth quarter, partly because of some soreness, partly because Heat coach Erik Spoelstra wanted to see if the group he had on the floor could finish things off.

It did. Barely, but it did.

"We ran a lot of the offense in the fourth quarter through Bam and Tyler," Spoelstra said. "Those were great experiences and really important for our team."

The Heat victory kept Popovich at 1,334 regular-season wins in his career as coach of the Spurs, meaning he remained one victory behind Don Nelson - one of his former bosses - on the NBA's career list.

Popovich closing in on the record has been a storyline all season, particularly so in recent days as it has become imminent. And, probably to nobody's surprise, he's ready for the chase to end.

"Being in this position is awkward, surreal, unexpected, never planned and all of the above," Popovich said. "It's the best way to describe it."

Devin Vassell had a career-high 22 points for the Spurs. Keita Bates-Diop and Lonnie Walker IV also had 22 apiece for San Antonio, which got 19 points and 11 assists from Tre Jones.

Kyle Lowry finished with 13 points and 10 assists for Miami.

The Spurs were without their three leading scorers. All-Star Dejounte Murray was held out with a bruised left knee - "probably being overly cautious," Popovich said - while Olympic gold medalist Keldon Johnson and starting center Jakob Poeltl were both sidelined by low back soreness.

"We just kept on playing," Popovich said. "That's the character of these guys. It's probably the most special thing about them - young group that keeps on playing. Very, very proud of them. Did a wonderful job against a fine basketball team, obviously."

Perhaps the absences lulled Miami into a seriously false sense of early security, because the Spurs got whatever they wanted for most of the first half.

The Spurs scored 157 points - the most ever by a San Antonio team in the Popovich era - in a double-overtime win at Washington on Friday, then kept the scoring going to get things started in Miami. San Antonio led 28-12 early and 40-28 when the first quarter was done, matching the most points the Heat had yielded in any quarter this season.

But the Heat didn't take the lead for good until time was expiring in the third quarter, when Adebayo made a 21-footer to put Miami up 99-97 going into the final quarter. That was the start of him scoring 15 points in a span of 4:02, but the Heat still had to sweat it out all the way to the end.

"Feels great to know my guys can go out there and get the dub," Butler said.

Spurs: San Antonio's first 18 points were all scored from inside the paint. ... Vassell had a four-point play with 8:43 left in the third, his corner 3 being accompanied by a foul from P.J. Tucker. He then hit another 3 on the next possession, giving him seven points in 26 seconds. ... Murray didn't play in either game against Miami this season.

Heat: A monster week awaits Miami, with the team's next four games coming up against fellow Eastern Conference contenders Chicago, Milwaukee, Brooklyn and Philadelphia. "It's not the end-all, be-all, but you also don't brush it off and say these are just another game," Spoelstra said. ... The Heat got down double-digits almost immediately for the second consecutive night; it was 10-0 at New York on Friday, 12-2 against the Spurs in this one.

Among those in the crowd: new Miami Dolphins coach Mike McDaniel, along with Floyd Mayweather, Antonio Brown and Alex Rodriguez.

A fan unfurled a Ukrainian flag inside the arena during the first half, drawing cheers. Later, the Heat displayed the same flag on the massive video screen that adorns the front of the building.