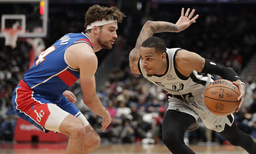 WASHINGTON (AP) Coming off his first All-Star appearance, Dejounte Murray had to work extra hard in the highest-scoring game in the NBA this season.

Murray had 31 points, 14 rebounds and 13 assists and the San Antonio Spurs outlasted the Washington Wizards 157-153 in double overtime Friday night.

The game might not have gone on so long if Murray hadn't missed potential winners at the end of regulation and the first overtime. He matched his season high in minutes with 43.

"He looked like he got a little tired. Might have been too much All-Star break that he didn't get," Spurs coach Gregg Popovich said. "I put him in a one-on-one situation a few times and maybe I shouldn't have done that, judging that he was a bit tired, but he's our guy. He made a big 3, a couple free throws, so, I think Michael (Jordan) missed some shots at the end of games, too."

Keldon Johnson scored a career-high 32 points, and Jakob Poeltl added a career-high 28 points for the Spurs. They have won five of seven to get Popovich within one victory of Lenny Wilkens' NBA record of 1,335.

Kyle Kuzma matched his season high with 36 points for the Wizards. They finally ran out of gas in the second extra period of this entertaining matchup between teams on the fringes of playoff contention.

The Spurs' points total was the second-highest in a game this season, and the Wizards' was the third-best. Murray hit two free throws with 13.6 seconds left in the second OT to seal it.

"I was a little tired, but when you're trying to win basketball games, there's no excuse," Murray said. "We fought through it."

In the first extra period, Neto drove past Murray for a layup that made it 145-145 with 18.3 seconds left. Murray then missed a jumper and Corey Kispert missed a long 3 at the buzzer.

The Spurs appeared to take control with an 11-0 fourth-quarter run, but the Wizards closed out regulation with an 8-0 burst in the final 1:14. Caldwell-Pope tied it on a driving layup with 19.4 seconds left, and Murray missed a deep 3 with 4.1 seconds remaining.

Murray scored a season-best 20 first-half points, and he completed his triple-double on a rebound with 4:57 left in the third quarter. Shortly thereafter, Popovich sat him down and Murray didn't re-enter the game until midway through the fourth.

Murray has 12 triple-doubles this season and 16 in his career, both franchise highs.

The biggest lead by either team was an 11-point advantage for San Antonio early in the third quarter, but the Wizards responded with a 17-3 run led by Kuzma, who scored or assisted on six straight baskets.

The Spurs led 75-71 after a defense-optional first half in which the Wizards made 11 of 18 3-point attempts but San Antonio countered with a 44-24 scoring advantage in the paint.

"I have to give them credit. They're playing exceptionally well offensively," Wizards coach Wes Unseld Jr. said. "They're scoring a lot of points. They lead the league in points in the paint. They're doing something right."

Spurs: Lonnie Walker IV scored 23 points. ... Murray's 20 first-half points matched his and the team's season high. He also had 20 on Nov. 16 in a loss at the Clippers. ... Josh Richardson was out with a sore right shoulder that he woke up with on Friday, Popovich said.

Wizards: Daniel Gafford had 17 points, Deni Avdija had 14, Kispert had 12 and Ish Smith had 10. ... C Thomas Bryant, who had started the past nine games, came off the bench after suffering a right ankle sprain in practice. ... Kristaps Porzingis, acquired in a trade-deadline deal with Dallas, remains sidelined with a bone bruise in his right knee and Unseld said the team would not rush him back.

Spurs: At Miami on Saturday night.

Wizards: At Cleveland on Saturday night.