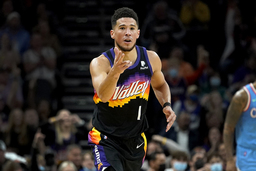 PHOENIX (AP) In the span of about two minutes late in the fourth quarter, Chris Paul hit a 3-pointer, found Devin Booker for a picturesque alley-oop slam and made a difficult short jumper off the glass to push the Phoenix Suns up by four points.

Just another ho-hum finish in winning time for arguably the NBA's best backcourt.

Booker scored a game-high 26 points, Paul added 17 points and 14 assists, and the All-Star duo led the Suns to another victory by beating the Los Angeles Clippers 103-96 on Tuesday night.

"We turn it on," Booker said. "I don't want to make it sound like it's an on/off switch like we're not trying the rest of the game, but we've been in those situations, and we understand how much those little plays and 50/50 balls matter."

The Suns have won six straight games and 17 of their past 18 dating back to Jan. 11. They also pushed their NBA-best record to 47-10 with one game remaining before the All-Star break. Mikal Bridges added 19 points and nine rebounds - including a crucial 3-pointer in the final minute - while Deandre Ayton had 12 points and 12 rebounds.

Phoenix has built its dominance by being a terrific team in the fourth quarter, especially with a lead. The Suns are now 36-0 this season when taking an advantage into the final quarter.

The Clippers were coming off an impressive win against Golden State and put up a great fight against the Suns in a back-and-forth second half that kept the outcome uncertain until the final minute. Los Angeles fell to 29-31 for the season.

Marcus Morris Sr. led the Clippers with 23 points while Nicolas Batum had 18. Reggie Jackson had a tough shooting night, making just 7 of 26 shots from the field.

The Suns went on a 15-2 run midway late in the third quarter to turn a tie game into an 81-68 lead. Phoenix settled for an 81-72 advantage heading into the fourth.

But the Clippers responded quickly, boosted by a pair of 3-pointers from Luke Kennard. Los Angeles took its first lead of the fourth on Jackson's 17-foot jumper that made it 90-88 with 6:10 remaining.

As they've done in pretty much every fourth quarter this season, the Suns didn't flinch. Paul, Booker and Bridges all had big moments as they retook the lead and pulled away.

"I do think the experiences we've had over the past couple years with this group, with Chris being the point guard, has certainly helped us," Suns coach Monty Williams said. "Chris and Book aren't afraid to take those shots. They're not afraid to have the ball in their hands."

That was enough for the Suns, who got the final 3-pointer from Bridges and some stellar defensive stops in the final minutes to seal the win. The Clippers scored just one point in the final 2:53.

"They have a team full of guys who can defend and want to defend," Clippers coach Ty Lue said. "That makes them great right there."

The Suns took a 53-47 lead into halftime. Booker led Phoenix with 13 points before the break while Ayton added eight points and eight rebounds. Morris - a former Suns player - had 14 points for the Clippers.

Clippers: Kennard was questionable with left ankle soreness but played in the game. He finished with 11 points in 25 minutes. ... Zubac finished with his 15th double-double of the season.

Suns: Guards Cameron Payne (right wrist sprain) and Landry Shamet (right ankle sprain) didn't play. Payne has missed the last 11 games while Shamet has missed the past seven. ... F Torrey Craig and G Aaron Holiday both played their second game this season with the Suns after being acquired in separate trades at last week's trade deadling. Craig finished with seven rebounds while Holiday had three points and two assists. ... Hosted a sellout crowd at the Footprint Center for a 15th straight game.