Simons has 30, Blazers beat Knicks with huge rally in 4th 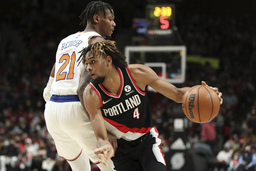 Newly acquired guard Josh Hart, one of several players new to Portland's roster after a flurry of trades before the deadline, added 23 points in his Blazers debut.

Portland closed the gap to 98-92 in the final period when Simons and Ben McLemore hit back-to-back 3-pointers. Jusuf Nurkic's dunk finally put Portland in front 99-98 with 4:23 left, capping a 20-4 run.

The teams traded 3-pointers from Alec Burks and Simons before Hart's layup gave Portland a 106-101 lead with just under 2 minutes to play and New York couldn't catch up. Portland outscored the Knicks 35-11 in the fourth quarter.

Julius Randle led the Knicks with 28 points and 16 rebounds, while Kemba Walker finished with 23 points.

"We just fell apart," Walker said. "They got momentum and never looked back. Pretty disappointing."

Hart was acquired in a multiple-player trade that sent longtime Blazers guard CJ McCollum to New Orleans. The move marked something of an end to an era in Portland with McCollum and Damian Lillard anchoring the backcourt.

"He plays with a sense of urgency all the time, and chip on his shoulder all the time," Blazers first-year coach Chauncey Billups said about Hart, who is in his fourth season in the league. "He loves to play defense. You know, he loves to take matchups on offensively. He can obviously shoot the basketball but he's a downhill driver."

Lillard hasn't played in the new year because of an abdominal issue that required surgery. There was no timetable for his return, although it appeared unlikely he'd come back this season.

Justise Winslow, another newcomer who came via a trade with the Los Angeles Clippers, also started and finished with 14 points.

"They are guys who want to learn, guys who give everything that they've got," Hart said of his new teammates. "So it was exciting. We're obviously building for the future, but any and every minute we can get of in-game experience, for even myself but also these young guys, is great."

The Knicks were without RJ Barrett, who missed his second game with a sprained left ankle, and center Nerlens Noel, who had a sore left foot.

The Knicks were cold at the start, and Portland took a 12-2 lead paced by Hart with a pair of 3-pointers. New York eventually warmed up, taking a 53-48 lead into halftime.

Rookie Quentin Grimes hit back-to-back 3-pointers to push the Knicks' lead to 72-56 in the third.

Nurkic finished with 12 points and 20 rebounds for Portland.

"Competitiveness, toughness, discipline. All that matters. Everyone goes through tough times on a road trip. Thirty-five to 11 in the 4th quarter, badly outrebounded, is going to make it hard to win that game," New York coach Tom Thibodeau said.

The game was played at 2 p.m. local time, which was unusual for a Saturday game in Portland, but it was one of the NBA games this season designated for primetime TV in Europe.

Knicks: Saturday's game marked the end of a five-game road trip. ... It was the first of two games against the Blazers this season. ... Grimes made his fourth start of the season. ... The Knicks were coming off a 116-114 victory at Golden State that snapped a four-game losing streak.

Trail Blazers: Elijah Hughes, acquired from the Utah Jazz with Joe Ingles in a three-team trade on Wednesday, made his Blazers debut. Ingles is out for the season after a left ACL tear. ... Hart had a season-best 13 points in the opening half. ... Portland downed the Lakers 107-105 on Wednesday to snap a six-game skid.

TO TANK OR NOT TO TANK?

Although the Blazers are clearly looking toward the future with recent roster moves, they've had a pair of thrilling wins, first against the Lakers and then the comeback Saturday versus the Knicks. Not the type of run for fans eager for a high lottery pick.

"For fans who want to see us lose, I guess just turn the TV off when it gets close," Billups joked.