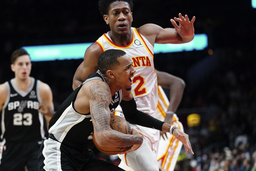 ATLANTA (AP) Dejounte Murray tied his career highs with 32 points and 15 assists to go with 10 rebounds for his 11th triple-double this season, Keldon Johnson scored 26 points and the San Antonio Spurs cruised to a 136-121 victory over the Atlanta Hawks on Friday night.

The Spurs shot 24% on 33 3-point attempts in Wednesday's loss at Cleveland, but they got off to a sizzling start. The were 8 for 9 to take a 43-29 lead at the end of the first quarter. San Antonio tied a season high with 18 3-pointers.

Murray was there the whole way, going 11 of 18 from the field, including 8 of 9 on 3-pointers, and leading a relentless defensive attack on the perimeter that held the Hawks, who entered second in the NBA on 3s, to 29.3% beyond the arc.

"That's the thing in this league," Murray said. "You make shots, you miss shots, and I think tonight we made shots, but we also kept our composure and matured. From the first quarter to the fourth quarter, we didn't let up. We knew we couldn't let up against a scoring team like Atlanta. That's really what it was tonight."

Bogdan Bogdanovic had 23 points in a reserve role and Trae Young, the league's third-leading scorer, finished with 16 for Atlanta. The Hawks had won eight of nine at State Farm Arena but began the game 10th in the Eastern Conference.

"Just flat," Atlanta coach Nate McMillan said. "I don't understand where that came from. As we've talked about the last couple of days, with the position we're in and the urgency we need to play with, we were just flat.

"They outworked us. They played harder than us. They executed better than us, and it happened for 48 minutes. This is a surprise."

The Spurs, who began the night 13th in the West, had dropped 13 of 18, but this game was hardly in doubt as they pushed the lead to 26 at the 9:16 mark of the third on Murray's jumper. A 14-3 run by Atlanta trimmed the lead to 12 late in the third, but San Antonio wasn't further threatened, going up by 23 on Devin Vassell's dunk with 7:47 remaining.

Murray punctuated the fourth by tying his career high in points with a steal and a dunk that made it a 24-point lead with 4:10 to go. He left the game with the rest of the starters at that point.

Murray's 3 made it 21-11 for the game's first double-digit lead. From there, Johnson and Vassell hit 3s and Jakob Poeltl a pair of free throws to put the Spurs up 34-17 with 4:49 left in the first.

Atlanta pulled within six midway through the second, but quickly gave back the momentum and trailed by 17 again on Zach Collins' 3. The Spurs, up by as many as 18 in the first half, led 73-56 at intermission.

Spurs: Murray set the Spurs' franchise mark for career triple-doubles with 15, breaking a tie with David Robinson. ... Vassell started after Derrick White was traded to Boston on Thursday and finished with 20 points. ... Poeltl hit from halfcourt for his first 3-pointer of the season to beat the second-quarter buzzer. ... G Tomas Satoransky, acquired from Portland in a three-team trade this week, will join the team in New Orleans on Saturday. ... G Josh Richardson and swingman Romeo Langford, acquired in the deal with the Celtics, are expected to join the team in Chicago on Monday. ... San Antonio traded for G Goran Dragic in a deal that sent F Thaddeus Young to Toronto, but he is expected to be bought out. Dragic has played only five games this season after not cracking Raptors coach Nick Nurse's rotation. ... The Spurs have three first-round picks heading into this year's draft.

The Hawks made no moves at the trade deadline. That McMillan fine.

"If nothing makes sense and you feel comfortable with what you have, which we do, you stay put, which is what we did," McMillan said. "It's good to be able to move on from the trade deadline. We know that we're going to be the group that finishes this season together and we can focus on that."

Spurs: At New Orleans on Saturday.

Hawks: At Boston on Sunday.