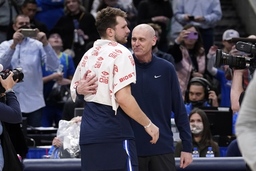 Carlisle coached the Mavericks during the past 13 seasons, leading the team to its lone title in 2011. He resigned June 16 and rejoined the Pacers a week later. The 62-year-old coach was recognized with a video tribute before the game, tears streaming down his face afterward. After the final buzzer, Carlisle hugged Mavericks coach Jason Kidd, who played for him on the title team, and the Dallas players.

"This is a special place," Carlisle said. "It's a challenging thing coming back like this."

"He deserves it," Doncic said about his former coach's tribute.

Kidd said of their embrace: "I just said it was good to see him, and he said, `You guys are playing the right way, and you guys have a chance.' ... And best of luck the rest of the way."

Duane Washington Jr. led the Pacers with 22 points, and Domantas Sabonis had 21 points and 15 rebounds. Coming off an overtime victory Friday night at Oklahoma City, Indiana has lost four of five to fall to 18-33.

Kristaps Porzingis left the game in second quarter with right knee soreness. Dallas' No. 2 scorer averaging 19.7 points, Porzingis had five points and one rebound in 11 minutes.

Dallas led 34-23 after one period, with Doncic scoring or assisting on 26 points. He played only two minutes in the fourth quarter.

"If he's not the best player in the world, he's right on the cusp," Carlisle said.

Bullock scored 14 points in the second period, hitting all five of his shots and three 3-pointers. He's one of multiple Dallas players filling the void left by last Tuesday's injury to Tim Hardaway Jr., who's out indefinitely with a fractured fifth metatarsal in his left foot.

"I know what I'm capable of doing," said Bullock, who joined the team as a free agent last August. "Now that he's down, it's the next man up."

Late in the third quarter with Dallas leading by 17 points, Carlisle indicated Doncic had traveling and got the call, much to the Slovenian's dismay.

"You've got to try to find some way to slow the guy down," Carlisle said with a smile.

WISH YOU WERE HERE

Indiana's Myles Turner, who leads the NBA averaging 2.8 blocks per game, missed his eighth consecutive game with a stress fracture in his left foot. Malcolm Brogdon sat out for the fifth straight game with a sore right Achilles and has played in only three of Indiana's last 21 games. Goga Bitadze, who started four games recently when Sabonis was sidelined, missed the game with a foot injury.

"We're having a chance to develop young players," Carlisle said.

Pacers: Washington scored 10 points, hitting two 3-pointers, in the first three minutes of the second quarter. . With Sabonis playing 44 minutes Friday in his first game back, he played 29 on Saturday and sat out most of the fourth period.

Mavericks: It was Kleber's eight career double-double. . Saturday's game was their second of four straight and six of seven against teams under .500.

Mavericks: At Orlando on Sunday night.