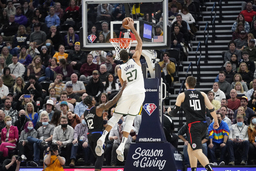 "We are holding ourselves to a higher standard because we've done this in the regular season. We need to be good enough to take that next step," Mitchell said.

Mitchell scored 19 of his 27 points in the second half, Bojan Bogdanovic made six 3-pointers and the Jazz beat the Los Angeles Clippers 124-103 on Wednesday night for their eighth straight win.

Mitchell's jumper wasn't falling early so he relied on a variety of moves and change of pace to get to the basket.

"I am trying not to be predictable, trying to find a balance between being explosive and doing what I did in the playoffs last year, scoring while being grounded (because of a hurt ankle)," Mitchell said.

Marcus Morris had 24 points and Eric Bledsoe added 21 for the Clippers, who had a four-game winning streak snapped.

The last time the Clippers and the Jazz met on the court, Los Angeles came back from a 2-0 deficit in the Western Conference semifinals and eliminated the Jazz with an unprecedented comeback from 25 points down in the series-ending game.

While Kawhi Leonard also missed that memorable playoff clincher and is still out recovering from right knee surgery, the Clippers did have Paul George and Nicolas Batum. This time around, L.A. was also short those two primary players.

Mitchell scored 13 in the third quarter and powered a 9-0 burst that gave the Jazz their largest lead of the game at 87-70 on his 3-pointer.

"He did an excellent job tonight of mixing up the 3 when the bigs were able to really get a hit and that was open and then attacking the rim finishing or finding people so he played a really balanced game," Utah coach Quin Snyder said.

The Clippers battled back to within single digits several times but never could get closer than seven. The Jazz, usually Mitchell, had an answer each time as they were able to penetrate for inside baskets or dish out to an open perimeter shooter.

"I didn't blitz him soon enough. He had already got in a rhythm but I thought with their shooters we could just play them 2-on-2 like we did in the first half and we'd be fine. But like I said, he's a great player, he took over the game," Los Angeles coach Tyronn Lue said.

The Jazz put the game out of reach when Bogdanovic hit two corners 3s around Gobert's block of Morris. Clarkson hit another 3-pointer and Gobert had an emphatic follow dunk to make it 119-97 for the Jazz with 3:49 remaining.

"It was just unselfishness," Bogdanovic said. "Double-teaming or blitzing Donovan allows us to play 4-on-3 on the other side. I think that was the biggest part of the game."

The Jazz are playing as well as they have all season, including winning all four on their recently completed road trip. Mitchell has led Utah in scoring during all eight games of the current streak, averaging 29 points and five assists during that span and shooting 54% from the field.

Jackson sparked a 12-0 Clippers run in the second quarter with a 3-pointer, but the Jazz lead 65-59 at the half thanks to Bogdanovic's 4 for 4 from 3-point range and Clarkson's 14 points.

"They are a really good half-court team, but once they get a couple in transition, they are feeling good and it opens up their offense a lot," Bledsoe said.

Clippers: Bledsoe made all six of his shots in the first half along with five assists and five rebounds. He hasn't scored more than 21 points since the season-opening game against Golden State . The Clippers had 16 turnovers which the Jazz converted into 18 points. Los Angeles only got two points off Utah's nine giveaways.