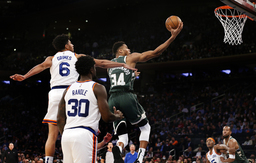 NEW YORK (AP) Khris Middleton scored 24 points and Giannis Antetokounmpo had his first triple-double of the season to lead the Milwaukee Bucks to a 112-97 victory over the short-handed New York Knicks on Sunday.

"We're seeing different guys come in and make plays and make shots," Allen said. "Different guys are going off each night or there will be stretches when somebody hits some big shots. Tonight it was (Portis) for a stretch, then (Hood) coming in and getting 14 off the bench. That's huge."

Milwaukee (18-10) never trailed as it won its second straight game and 10th out of 12 overall.

"We talk a lot about being unselfish and making the right play, having high-IQ guys that are willing to make the right pass," Bucks coach Mike Budenholzer said. "It was a good team effort."

In his first NBA start, Quentin Grimes scored 27 for the Knicks and set a team record for the most 3-pointers made in a game by a rookie with seven. Grimes' 27 points were the most points by a Knicks rookie in a game since 1996-97.

"I always prepare myself for a moment like this," Grimes said. "But it was definitely a surreal moment and I was just trying to soak it all in."

The third of four regular-season matchups between the Eastern Conference franchises reinforced why the Bucks and Knicks exist on significantly different plains in the NBA strata.

Milwaukee came out firing on all cylinders, with the Bucks leading 9-1 4:07 into the game and 26-16 at the end of the first quarter. The lead was stretched to 54-33 after Portis' 3-point play with 4:28 left in the second quarter. At halftime, Milwaukee had a 61-48 advantage.

But the Knicks fought back behind Grimes and Rose in the third quarter. Grimes scored 12 points, all on 3s, Rose had 10 and New York cut the deficit to nine on three separate occasions.

That was as close as it would get. Milwaukee outscored New York 6-1 over the final 1:26 of the quarter and pushed the advantage to 19 after Antetokounmpo's floater with 5:49 left in the game.

"We just have a great team," Hood said.

Bucks: Like he has against seemingly every team in the league, Antetokounmpo has enjoyed great individual success playing against New York. Entering the matinee, Antetokounmpo averaged 21. 9 points, 9.8 rebounds and four assists in 28 career games - including 25 starts - against the Knicks. He started quickly Sunday, having a hand in Milwaukee's first nine points (four points, two assists) and finished the first quarter with eight points, four rebounds, and two assists.

Knicks: Starting swingman R.J. Barrett and key reserve Obi Toppin missed the game because they are in the league's health and safety protocols, and the team announced before the game that starting point guard Alec Burks was out due to personal reasons. Thibodeau started Rose in place of Burks and Grimes replaced Barrett. "It was tough," Julius Randle said about the absences. "But a lot of people in the league, teams in the league have to deal with it. So next man up."

University of Alabama quarterback Bryce Young, who won the Heisman Trophy on Saturday night, was in attendance at Madison Square Garden. Young was shown on the video board during a stoppage in play late in the third quarter and received an ovation from the sellout crowd of 19,812.