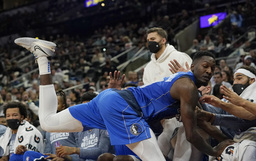 "Playing with Luka is extremely easy," Porzingis said. "He takes so much pressure off everybody else. Makes everybody else better and get more open looks."

Dallas clinched the season series against its intrastate rival with its third consecutive win over San Antonio in the season's first 12 games.

The Mavericks did not want a repeat of a loss Wednesday night, when the Chicago Bulls took control in the third quarter on their way to a 117-107 victory. Dallas accomplished that, outscoring San Antonio 34-20 in the third.

Devin Vassell had 20 points, Dejounte Murray and Keldon Johnson had 15 points each and Doug McDermott added 14 for the Spurs. San Antonio has failed to win consecutive games this season.

"We can't get too complacent after we get one win," Spurs forward Doug McDermott said.

The Spurs closed on a 20-9 run, but the game was out of reach after the first half.

The Mavericks were focused on protecting the ball after giving up 19 turnovers in their previous victory against the Spurs on Nov. 3. Dallas did so, committing only one turnover in building a 12-point lead in the first half and finished with a season-low five turnovers.

"They're aggressive, they're going to use their length and get out in passing lanes," Mavericks coach Jason Kidd said. "We felt we had to take care of the ball and we did that tonight in the first half as well as the second half."

San Antonio was without starting center Jakob Poeltl, who remains under the league's Health and Safety Protocols.

"We miss Jak," Vassell said. "It's evident, we're playing small. As for right now, we've got to adjust."

"I think we took advantage of the mismatches," Porzingis. "Played big down there. We have that confidence in each other that we want to share the ball, we want to make the other team pay for those mismatches."

Playing in just his fourth game since returning from an injured back, Porzingis has scored 54 points in his last two games. He finished 12 for 22 from the field and 3 for 9 on 3-pointers.

"When smalls guard us, both of us, we have to take advantage of that," Doncic said.

San Antonio coach Gregg Popovich said Poeltl may travel with the team for its upcoming three-game road trip, which opens Sunday at the Los Angeles Lakers.

Popovich joked he was unclear when a reporter noted his own uncertainty with the protocols.

Mavericks: Doncic emerged smiling and unscathed after diving headfirst into the second row after being fouled from behind by Drew Eubanks. Doncic leapt to avoid fans in the first row and planted headfirst into the laps of those in the second row. . Porzingis' previous season-high was 22 points against Chicago on Nov. 10. . Dallas will not face San Antonio again until the season finale for both teams on April 10. . Maxi Kleber missed his sixth straight game with a strained left oblique. Kidd said the team will update Kleber's status Monday.

Spurs: C Jock Landale missed the game due to the league's Health and Safety Protocols. . F Keita Bates-Diop was a late scratch from the lineup with a bruised lower back. . San Antonio only had 10 players available due to injuries or illness along with G League assignments for Josh Primo and Joe Wieskamp.