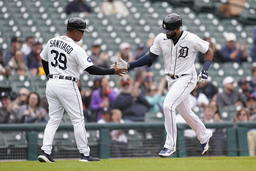 Hinch announced a series of staff changes Friday, two days after Detroit closed a disappointing season with a 66-96 record that extended the franchise's postseason drought to eight years.

Alfredo Amezaga will return as the team's first base coach after joining the Tigers' coaching staff late in the season and Gary Jones, who coached first base in 2022, will move to third base or to assist the team defensively.

"This season is not these coaches' fault," Hinch said. "We are all responsible, and we're all a part of this. Sometimes changing voices is important in sports and sometimes it's time to mix up the message to the players."