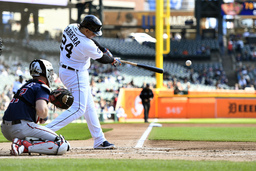 "There are better times ahead," Hinch said.

This past season could not have been much worse for the Tigers. Detroit dashed high expectations with an awful April, the first of five straight months with a losing record en route to a 66-96 record that was the third-worst in the American League.

"We haven't been productive, but that's not a knock on them as men," Hinch said. "We stuck together, which I take great pride in."

Detroit seemed set up for a relatively successful season after winning 77 games in 2021, its best record since 2016, which was its only winning season under general manager Al Avila. The once-proud franchise spent a lot of money entering the season to bolster the rotation and lineup - and didn't get much of a return on the investment.

Javier Baez, signed to a $140 million contract to add a much-needed star shortstop, hit .238 with 17 homers, 67 RBIs and 147 strikeouts in 144 game. Left-hander Eduardo Rodriguez signed a $77 million, five-year contract, went on the restricted list due to personal matters for much of the season and finished 5-5 with a 4.05 ERA.

The disappointing season cost former general manager Avila his job in August, leading to the hiring of Scott Harris as president of baseball operations.

"We've got a lot to prove as a team moving forward," right-hander Alex Lange said.

In September and October, the Tigers played .500 baseball and that included wininng nine of 10 games late.

The Tigers have not been in the playoffs since 2014, and the eight-year drought is tied for the longest active skid in the majors with the Los Angeles Angels.

Detroit was counting on Rodriguez to lead a young rotation, which was hit hard by injuries all season and led to 17 differnt pitchers starting at least one game. Pitchers Casey Mize, the No. 1 pick overall in 2018, Matt Manning, Tarik Skubal and Michael Pineda all had their season stunted by injuries.

The Tigers averaged just 3.4 runs a game, ranking last in baseball, and their .231 team batting average was among the worst in baseball.

The Tigers were banking on Baez producing at the plate, and the two-time All-Star had one of the worst seasons of his career.

"Every veteran pretty much said the same thing, the first year (with a new team) is always hard with players trying to do too much," he said. "That's exactly what I was doing."

Miguel Cabrera will turn 40 early next season, when Detroit is due to pay him $32 million in the final year of his $292 million, 10-year contract.

Cabrera was hitting .308 in early July, but lower-back problems that have plagued his career in recent years limited him to 112 games this season and he finished with just five homers and 43 RBIs.

Carpenter is rooting for the all-time great to return in 2023 to help the Tigers bounce back.

"Hopefully he comes back really healthy and is going to be a big part of it," Carpenter said.