Mariners outlast Rangers in 11, close in on playoff berth 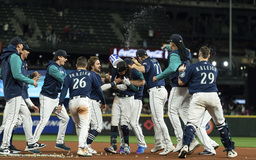 SEATTLE (AP) Mitch Haniger and Jarred Kelenic both homered twice, J.P. Crawford singled home the winning run in the 11th inning and the Seattle Mariners closed in on their first playoff berth in 21 years by beating the Texas Rangers 10-9 Thursday night.

The Mariners moved a half-game ahead of Tampa Bay for the second of three AL wild cards and reduced their magic number to one for clinching a postseason spot.

One more win or a Baltimore loss would give Seattle its first playoff appearance since 2001, ending the longest drought in the four major North American professional sports.

The Mariners are 1 1/2 games behind Toronto for the top wild card, which hosts a best-of-three series beginning Oct. 7. The other two wild cards play on the road.