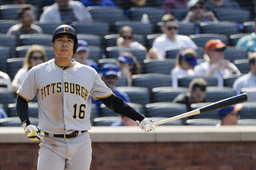 South Korea's Yonhap news agency reported Monday the suspension for Kang, who last week filed to be reinstated from the league's "voluntarily retired" list, will come into effect when he joins a KBO team. The ban will delay his anticipated return to the Korean league.

Yonhap said the 33-year-old Kang was in the United States and did not attend Monday's KBO disciplinary committee hearing, where he was represented by his lawyer, Kim Sun-woong.

Kang signed with Pittsburgh in January 2015, becoming the first position player to jump directly from the Korean Baseball Organization to the majors.

He made a splash as a rookie, finishing third in Rookie of the Year voting after hitting 15 home runs. His season ended abruptly that September when he broke his leg after getting taken out at second base by Chris Coghlan of the Chicago Cubs.

Kang returned in 2016 and hit 21 home runs before his career went into a tailspin after getting arrested in Seoul in December 2016 on charges of driving under the influence of alcohol. Yonhap said he had two previous DUI cases.

Kang received a two-year suspended sentence, spent the entire 2017 season on the restricted list after being unable to secure a visa back to the U.S. and played in just three games at the end of the 2018 season. The Pirates initially cut him before bringing him back on a one-year deal worth $3 million for the 2019 season, when he hit .169 with 10 home runs and had RBIs in 65 games.

Yonhap said Kang's lawyer submitted a two-page letter to the hearing to apologize for his past DUI charges. He later issued an apology through his agent, asking for one opportunity to play baseball and saying he'd taken the game for granted.

"I was a fool not to see how precious it was," Kang said.