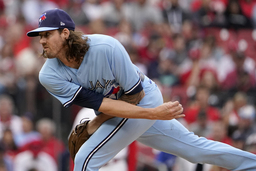 TORONTO (AP) Toronto's Kevin Gausman gave the Red Sox a rough time as Boston got back to playing its biggest foes in the AL East.

"The first game of the homestand you're trying to set the tone, especially as the starter," Gausman said

The Red Sox, who came in 7-14 against AL East opponents, lost the opener of a stretch in which they face Toronto, Tampa Bay and the New York Yankees 20 times in 23 games.

The Red Sox have 16 games remaining against both the Rays and Yankees.

Boston hadn't faced the Blue Jays, Rays or Yankees since losing three of four in Toronto from April 25-28.

"It's always a dogfight in this division, especially in recent years," Boston's Bobby Dalbec said.

Only five of Boston's previous 50 games had been against division foes, all of them against Baltimore. The Red Sox went 2-3 in those games, while going 31-14 against other opponents.

Guerrero hit a two-run home run, his 18th of the season, Matt Chapman also hit a two-run blast and George Springer added a solo shot as Toronto improved to 6-2 against Boston.

Guerrero has nine home runs in June. Only Aaron Judge (10) has more among AL hitters.

Gausman (6-6) snapped a four-start winless streak, winning for the first time since May 31 against the White Sox. Three of the four hits Gausman allowed were singles.

"He looked as sharp as ever tonight," Chapman said. "That's an awesome seven shutout innings from him."

Gausman is 2-0 with a 0.43 ERA in three starts against the Red Sox this season.

"He pounds the strike zone early on and then he expands," Cora said. "If you expand with him, you're going to have nights like this."

Boston's only runs came off newly promoted right-hander Shaun Anderson in the ninth, when Trevor Story hit a sacrifice fly and Dalbec added an RBI single that struck Anderson on the foot.

Making his first start of the season and the second of his big league career, Red Sox right-hander Connor Seabold (0-1) allowed seven runs and nine hits in 4 2/3 innings.

"I made too many mistakes," Seabold said.

Bo Bichette hit an RBI double in the first, and Springer made it 2-0 when he homered in the third, his 14th of the season.

BIchette followed with a single before Guerrero homered to center.

Lourdes Gurriel Jr. drove in a run with a fielder's choice in the fifth and Chapman made it 7-0 with a two-out homer to left, his 11th.

The Blue Jays are 21-10 when they hit two or more home runs.

Rafael Devers got the only extra-base hit off Gausman, a ball that bounced off the second base bag and into shallow left field.

"I feel like he gets stronger as the game goes on against us," Dalbec said. "He gets more vertical, more late life on the fastball."