Astros break through for 4 in 11th, slow O's playoff push 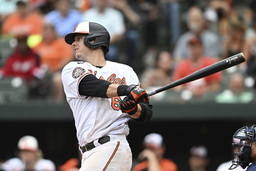 BALTIMORE (AP) Christian Vazquez hit a bases-loaded single to cap a four-run 11th inning for Houston, and the Astros went on to a 6-3 victory over the Baltimore Orioles on Sunday.

The Orioles' postseason hopes took another blow, missing a chance to move up in the AL wild-card standings. They remained four games behind Seattle for the third and final spot.

Houston ended the regular season 51-30 on the road. Only the Los Angeles Dodgers (52-26) will finish with a better mark. The Astros salvaged the last two games of this series after Baltimore shut them down in the first two.

Keegan Akin (3-3) retired only one hitter in the 11th for Baltimore, and that was Yordan Alvarez on a bases-loaded sacrifice fly that put the Astros ahead 3-2. Akin then hit a batter to re-load the bases and walked Kyle Tucker to make it 4-2. Vazquez's two-out, two-run single off Joey Krehbiel put Houston up by four.

Cedric Mullins singled home a run in the bottom half, but that was all the Orioles could manage.

Hector Neris (6-4) allowed the Orioles to tie the game at 2 in the 10th, but he pitched out of that jam and got the win.

Dillon Tate retired the first two batters of the 10th for Baltimore, allowing Yuli Gurriel to advance only to third as Houston's automatic runner. But he then threw a wild pitch that allowed the run to score.

With runners on second and third and one out in the bottom half, Rougned Odor hit a tying single to right. Neris then struck out Kyle Stowers and retired Jorge Mateo on a grounder to send the game to the 11th.

Cristian Javier allowed one hit in six outstanding innings for Houston. He struck out eight in his third straight scoreless outing and faced the minimum hitters possible. He retired the first 13 Baltimore batters before a single by Ryan Mountcastle. That was the only baserunner Javier allowed, and Mountcastle was erased immediately on a double-play grounder.

Javier exited after a 46-minute rain delay following the sixth. Will Smith pitched the seventh, but the Orioles tied it at 1 off Ryne Stanek in the eighth. Odor hit a two-out RBI single high off the wall in right, narrowly missing a two-run homer. Baltimore left the bases loaded that inning.

Houston opened the scoring in the third on a sacrifice fly by Mauricio Dubon.

Baltimore heads to Boston for a four-game series starting Monday night, when Jordan Lyles (11-11) takes the mound for the Orioles against Connor Seabold (0-3). Baltimore is two wins away from ensuring at least a .500 season.

The Astros are off Monday before hosting two games against Arizona. Lance McCullers (4-1) is expected to start Tuesday night for Houston.