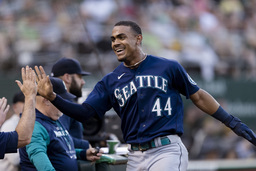 OAKLAND, Calif. (AP) Julio Rodriguez and his teammates were amazed watching from the dugout as baseballs kept clearing the fences - one, two, then three of them in a row.

Rodriguez hit a two-run homer, Jesse Winker followed with a solo drive and then Eugenio Suarez connected in a burst of three straight longballs by Seattle in the seventh, and the Mariners slugged past the Oakland Athletics 8-2 on Tuesday night in a matchup of stumbling AL West rivals.

"It just felt amazing honestly just seeing everybody getting it going and score some runs like that," Rodriguez said. "It was definitely amazing to see. We were in the dugout, `Oh, there's another one.' It was fun. Being able to deliver like that for the team, I felt like everybody felt pretty happy about it."

Taylor Trammell connected leading off the third for Seattle, which snapped a three-game losing streak. The Mariners had dropped five of six and seven of nine but came out swinging to open a six-game road trip.

Manager Scott Servais hoped a change of scenery and time together would help Seattle snap out of its recent funk.

"You know what really brings a team together, winning," he said pregame.

He mentioned timely hits, too, and the Mariners delivered plenty of them. Seattle hit three consecutive homers for the first time since Aug. 27, 2004, against Kansas City - off Zack Greinke no less.

"We had the back-to-back-to-back, which was great to see. We hadn't seen one all year," Servais said. "So I was as excited as the guys were just squaring balls up. A lot of good things offensively tonight."

Rodriguez scored from first on Winker's double in the sixth. Ty France provided insurance with an RBI single in to start the five-run seventh for Seattle, then Rodriguez connected for his ninth homer.

Seattle lefty Marco Gonzales (4-7) allowed seven hits over seven sharp innings to end a three-game losing streak, earning his first victory in five starts since beating the A's on May 23 in Seattle.

"Just trying to stay in my process, get us back in the dugout and swing it," Gonzales said.

He surrendered Nick Allen's first major league home run on a two-run drive in the seventh. The A's, who snapped a season-high eight-game home losing streak Sunday by beating the Royals, lost for the 16th time in 19 games.

It was 92 degrees at first pitch, an exceptionally hot June day for the Bay Area - and the ball sure carried.

Tuesday marked the warmest first-pitch temperature for the A's since it was 94 on Sept. 6, 2020, for a doubleheader vs. the Padres.

"We're in Oakland. The hottest day I've ever seen in this stadium is today," Servais said.

Mariners: OF Kyle Lewis, on the seven-day concussion list, is improving. "He is feeling better. He's getting through cardio workouts," Servais said. ... During Monday's off day, Seattle reinstated RHP Ken Giles from the 60-day IL with a sprained middle finger on his pitching hand. He made his Mariners debut in the ninth, Giles' first big league appearance since 2020 with Toronto.

RHP George Kirby (1-2, 3.56 ERA) pitches the middle game of the series for Seattle in his ninth career start and second vs. the A's. Oakland counters with RHP Paul Blackburn (6-2, 2.26), who has allowed just one run over his past two starts.