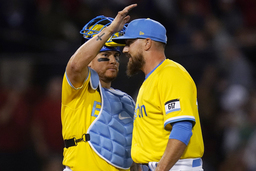 BOSTON (AP) Trevor Story hit a three-run homer out of Fenway Park, Christian Vazquez added a solo shot for a key run in the seventh inning and the Boston Red Sox beat the Detroit Tigers 5-4 on Tuesday night.

Boston, wearing unusual yellow jerseys with blue trim, went ahead 4-2 in the fourth when Story put a hanging a slider from rookie Beau Brieske (1-6) on Lansdowne Street for his 11th homer this season.

"Just got a pitch kind of in the middle part of the plate and tried not to do too much with it and it worked out," said Story, who has 48 RBIs in his first season with the Red Sox.

Vazquez lined Andrew Chafin's first pitch into the Green Monster seats for a 5-3 lead in the seventh.

Matt Strahm allowed Jonathan Schoop's leadoff homer in the ninth - Schoop's team-high sixth home run this year. John Schreiber got his second save this season when Miguel Cabrera hit a game-ending groundout with a man on.

Schreiber pitched for the third straight day and fourth time in five games.

"We needed one out, and he got it," manager Alex Cora said.

Detroit has lost eight of 10.

Javier Baez tripled and scored in the first and added a solo homer in the third. Cabrera singled in each of his first three at-bats and needs three hits to tie Rod Carew for 28th at 3,053.

Riley Greene had a pair of singles for the Tigers.

Cora said Schreiber, who hasn't allowed a run in 10 appearances this month, will be one of several Red Sox players to get a day off Wednesday. The Red Sox have already clinched their sixth straight series and have a break in the schedule coming Thursday, followed by a weekend series at Cleveland.

Cora said Rafael Devers will also get Wednesday off at third base and so will shortstop Xander Bogaerts, who went 2-for-4 Tuesday and scored a run, clearing a spot for prospect Jeter Downs to make his big-league debut. Downs, who was part of the package the Dodgers sent over in return for Mookie Betts, was called up from Triple-A Worcester on Monday and will start at shortstop on Wednesday, Cora said.

Baez singled with two out in the ninth and finished a double short of the cycle. He was robbed of another hit in the seventh when Story made a leaping grab at second on a line drive headed for right-center field.

"I knew I might have a shot. You just kind of track it," Story said. "I had to get up in the air a little bit and put my glove up."

Hill wasn't looking for a new ball after a foul by Cabrera and the toss from umpire Dan Bellino hit him in the chest. Hill said he was OK when Vazquez and Bellino came out to check on him.

"Bellino's got a good fastball," Hill said with a laugh. "I wasn't paying attention. You've got to keep your head on a swivel out there."

Tigers: Pitching coach Chris Fetter has removed his name from consideration for the vacant coaching position at the University of Michigan, manager A.J. Hinch said. Fetters was an assistant to coach Erik Bakich for the Wolverines for three years before joining Hinch's staff when he was hired as manager in 2020. Bakich left Michigan last week to take over at Clemson.

Red Sox: RHP Garrett Whitlock (right hip inflammation) could return as early as next week after throwing a simulated game on Tuesday, manager Alex Cora said. Cora said Whitlock felt good, but his return status will depend on how he feels on Wednesday.

LHP Tarik Skubal (5-4, 3.13 ERA) of the Tigers faces Boston RHP Michael Wacha (5-1) on Wednesday night in the finale of the three-game series.