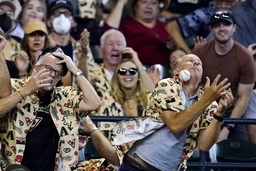 PHOENIX (AP) The best swing of Buddy Kennedy's short big league career is one that wasn't supposed to happen.

The Diamondbacks rookie smashed a grand slam on a three-ball, no-strike count after forgetting to look at the third base coach for the take sign, and it led Arizona to a 7-1 win over the Minnesota Twins on Sunday.

"You better hit a grand slam if you're going to swing away," D-backs manager Torey Lovullo said grinning.

Kennedy said he got swept up in the emotion of his first big league at-bat with the bases loaded and more than 30,000 fans in the stands. He forgot the count and didn't even look at third base coach Tony Perezchica. Turns out it was for the best: He turned on a high fastball and launched it into the left field seats.

Only when he returned to the dugout did he realize he might have messed up.

"I take responsiblity, that's my fault," Kennedy said. "The moment got to me."

Christian Walker added two solo homers and Pavin Smith hit another solo shot. Smith snapped an 0-for-23 streak skid in the second inning with a single.

Merrill Kelly (6-4) threw seven effective innings as the D-backs built their lead. The right-hander gave up one run on five hits, striking out five and walking none.

The Diamondbacks took two of three games in the series.

The 23-year-old Kennedy's grand slam came in just his ninth MLB at-bat and was his first big league homer. He took a hearty swing on the 3-0 fastball from Twins reliever Caleb Thielbar and didn't miss, crushing a pitch that came off his bat at 105 mph.

"It's just a blur," Kennedy said. "Running the bases, I felt like a little kid in Little League when you hit your first home run. Living the dream and enjoying it."

Kennedy even got a curtain call from the Chase Field crowd, who chanted his first name until he popped out of the dugout and acknowledged the cheers with a wave. His dad was also in the stands for Father's Day.

"He just said he's so proud of me," Kennedy said. "He knows how hard I worked."

Kennedy - who played at the same high school as Angels star Mike Trout in Millville, New Jersey - was Arizona's fifth round pick in the 2017 draft.

Walker connected in the second and fourth innings. The first tied the game at 1 and the second pushed the Diamondbacks ahead 2-1. Smith's homer pushed the lead to 3-1.

Minnesota took a 1-0 lead in the first inning when Luis Arraez came home on Carlos Correa's double-play grounder. Arraez came into the game with an AL-leading .363 batting average.

"Kelly threw the ball really well," Twins manager Rocco Baldelli said. "We probably got a little big, trying to do a lot with some of our swings. He knows how to pitch, he knows how to take advantage of that."

Chris Archer (1-3) took the loss for the Twins after giving up two runs in four innings.

Walker had a new look for his two-homer outburst, shaving off his beard in the hours between Saturday night's game and Sunday. He already has 18 homers this season and is on pace to easily set his career high. He slugged 29 homers in 2019.

The normally-bearded Walker said he'll stay clean shaven forever if he keeps hitting like he did on Sunday.

Twins: OF Kyle Garlick (left hamstring) was activated from the injured list. RHP Trevor Megill was placed on the 15-day IL with a right shoulder impingement.

Diamondbacks: OF/C Daulton Varsho was out of the lineup on Sunday, one day after he left Saturday's game because of a heel contusion. Varsho said on Saturday he's optimistic that the injury won't keep him out of the lineup very long.

The Twins have a day off Monday before hosting the Cleveland Guardians for a three-game series beginning Tuesday. RHP Joe Ryan (5-3, 2.81 ERA) is the scheduled starter.

The Diamondbacks start a three-game series on the road against the San Diego Padres on Monday. RHP Zach Davies (2-3, 3.78) is the scheduled starter.