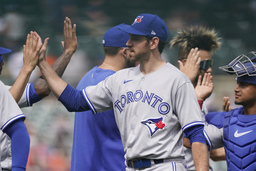 "This was going to be an easy win, that's what I thought," Yankees right-hander Luis Severino said. "You know, it's not over until it's over. They made a great comeback."

Toronto got all of its runs on homers and became the first Yankees opponent to score in double digits this season. New York leads the majors with a 49-17 record.

Gurriel made it 8-7 with his two-out slam off Castro in the sixth, awakening the crowd of 44,395.

"Credit to Gurriel," Yankees manager Aaron Boone said. "He worked an at-bat, got to two strikes, and didn't miss his pitch. "

Hernandez brought the fans to their feet again in the seventh with his third home run in five games, making it 10-8.

"Against the Yankees, every game is going to be like that," Hernandez said of the intense, back-and-forth matchup. "Everybody knows the team that they have, the run they're on right now."

Tim Mayza gave up Rizzo's pinch-hit homer in the eighth, cutting it to 10-9, then allowed an infield hit to Gonzalez and walked pinch-hitter Jose Trevino. Closer Jordan Romano came on and got DJ LeMahieu to fly out, then struck out Aaron Judge to end the threat.

Romano wrapped it up in the ninth for his 17th save in 19 chances, getting Rizzo to ground out to strand the tying run at third base.

"We were right there and it just didn't go our way," Rizzo said.

Boone said he didn't use speedy Isiah Kiner-Falefa as a pinch-runner in the ninth because the shortstop has been dealing with a sore left hamstring for the past few days.

"I wasn't going to mess with it today," Boone said.

Kiner-Falefa said he hopes to return to the lineup Monday at Tampa Bay.

Pitching for the first time since he was scratched from Thursday's start against the Rays because of illness, Severino allowed five runs and three hits in five-plus innings.

Severino walked a season-high four and struck out nine.

"He looked strong to me, his stuff looked good," Boone said. "I thought he got a little bit better as he rolled along there."

Donaldson spiked his bat in anger after being hit by a pitch from Blue Jays left-hander Yuseki Kikuchi in the first. After Giancarlo Stanton struck out, the inning ended when catcher Alejandro Kirk threw behind Donaldson to pick him off first base.

Guerrero gave Toronto an early lead by connecting off Severino in the bottom of the first. Torres, who had three hits and three RBIs, homered in the second.

Donaldson, who won the 2015 AL MVP with Toronto, flipped his bat and admired his shot after his two-run homer in the third. After crossing the plate, Donaldson did a celebratory dance with Joey Gallo, who had walked ahead of the two-out drive to left.

Torres hit a two-run double in the fifth and Higashioka and Gonzalez hit back-to-back homers off right-hander Max Castillo, who was making his major league debut.

IN TUNE WITH POP

Rizzo's pinch-hit homer was the first of his career.

Donaldson has 66 career home runs in Toronto, the most of any active player.