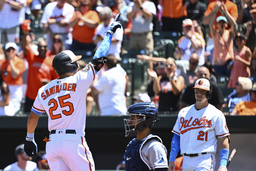 BALTIMORE (AP) Anthony Santander homered and pointed to his dad sitting in front of the press box as the Baltimore Orioles beat the Tampa Bay Rays 2-1 on Sunday.

"He has some big homers for us," Orioles manager Brandon Hyde said. "He's doing a great job taking what's given. Just not expanding as much this year and understanding the strike zone a little better."

Orioles starter Jordan Lyles was scratched Sunday morning because of a stomach virus. As a result, Hyde was forced into a bullpen game.

Austin Voth, claimed by the Orioles off waivers from the Washington Nationals on June 7, made his first start of the season and 23rd of his five-year career. He threw 2 2/3 scoreless innings with four strikeouts.

"Luckily I was here early enough to have plenty of time to prepare and everything," Voth said. "I was just like, 'all right, let's go.' This has happened to me before so this is nothing new."

The Orioles used seven pitchers and Nick Vespi (2-0) picked up the win after holding the Rays without a run over 11/3 innings. Jorge Lopez earned his 11th save by getting the last four outs.

The Orioles increased the lead to 2-0 in the third on a double by Cedric Mullins.

The Rays pulled to within a run in the fourth on a two-out double by Taylor Walls off Bryan Baker.

Kluber allowed two runs and four hits with six strikeouts and one walk over six innings.

"(Kluber) was so good again for us," Rays manager Kevin Cash said. "It's just irritating and frustrating all at the same time not being able to help him out a little bit. We swung the bats okay but we have to piece together some bigger innings than what we're doing here as of late."

Cash's father, Michael Cash, attended his first game at Camden Yards to celebrate the holiday. Hyde hit grounders to his son, Colton, before the game.

Orioles: DH Trey Mancini was held out of the starting lineup with a sore right hand. Mancini was hit by a pitch on Monday against Toronto.

Orioles: Hyde has not named a starter for Tuesday's game against the Nationals, who will start RHP Erick Fedde (4-5, 4.88 ERA).