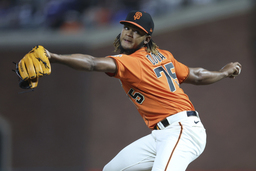 Ruf was activated off the bereavement list earlier in the week after being away following the death of his father. It turned out to be an emotional night, following a trying week.

"Obviously, it's hard to put into words,' Ruf said after the game. "It's been a tough week for me, my family. I'm thankful for the Giants and my teammates who have been so supportive. So, yeah, it's been tough."

The Lux homer pulled the Dodgers within 3-2 before the Giants scored three runs in their half of the fifth inning to pull away.

With Curt Casali on first base and one out, pinch-hitter Austin Slater hit a comebacker to Dodgers reliever Justin Bruhl, who slipped as he fielded the ball. That caused Bruhl to throw wildly past first as Casali and Slater advanced to third and second. One out later, Pederson singled home two runs and Ruf stroked an RBI single.

"Obviously playing with a pretty heavy heart right now," Evan Longoria said of Ruf. "I don't know that there's a better series to break out in. ... Great game for him. Obviously, hopefully that allows him to kind of relax a little bit. He's been great for us. He has the potential to carry us. ... it's nice to have him back on track."

Dodgers starter Walker Buehler (6-3) lost for just the second time in his career in nine decisions against the Giants. He allowed three runs and four hits in four innings before leaving the game with discomfort in his elbow.

Buehler's elbow became a subject of considerable concern. He emphasized the need for the results of tests on the elbow, which could come as early as Saturday.

"I've had stuff for years and years in the elbow," the two-time All-Star said. "Pretty consistent, same spot for the last couple of innings. It is what it is. We'll get it looked at, see what we're dealing with before we freak out, I guess."

Buehler hinted that his current bout with elbow woes is his most serious one of late.

Buehler said that he tried to pitch through his discomfort but couldn't.

"It didn't happen for me tonight," he said.

He cited a moment in the third inning when the pain "kind of grabbed a little bit, and it kind of didn't go away."

"This one's a little more specific and a little bit more - I don't want to say more painful; it's just the same thing over and over and over sometimes," he said. "It's something that we need to check on."

Pederson opened the scoring by leading off the second with a single, stealing second and scoring on Evan Longoria's double. Longoria scored on Brandon Crawford's single. Ruf hit his fourth homer of the season with one out in the fourth, and added his fifth homer with one out in the eighth off David Price.

Longtime rivals on the diamond, the Dodgers and Giants will join forces in pregame ceremonies Saturday at Oracle Park to observe Pride Day, a celebration of diversity.

"We're looking forward to it and partnering with the Dodgers on this, really coming together and emphasizing that it's not enough to reluctantly accept any community," Giants manager Gabe Kapler said. "It's really important that everybody feels welcome and wanted and appreciated. That is absolutely true for the LGTBQ+ communities."

Dodgers manager Dave Roberts cited the "awareness" and "inclusiveness" that the event promotes. "I think that two great organizations coming together to use our platform is a positive thing," he said.

Dodgers: Roberts said that left-hander Andrew Heaney (shoulder) will be expected to work at least five innings next Tuesday when he makes third injury rehabilitation start. Roberts said that due to logistics, Heaney will pitch not for Triple-A Oklahoma City, but instead for Double-A Tulsa against Wichita. Heaney continued to progress on Thursday, allowing two hits and walking none while striking out five in 4 1/3 scoreless innings for Oklahoma City against Sugar Land.

Giants: Outfielder LaMonte Wade Jr. (left knee) felt tightness in his left hamstring while performing baserunning drills, prompting the Giants to back off on his possible return. "I don't think we're at the stage where we have to consider this a real setback," Giants manager Gabe Kapler said, "but we're going to get through the weekend before we decide what's next." Kapler said that the Giants' medical staff prefers to consider Wade's injury "separate" from his knee. "But everything's always connected," Kapler added. Wade, one of San Francisco's leading hitters with 18 homers last year, has appeared in 10 of 57 games ... Second baseman Tommy La Stella reported back tightness, prompting the Giants to scratch him from the lineup ... Though Anthony DeSclafani (right ankle) is expected to make an injury rehabilitation start sometime this weekend, Kapler refused to speculate on when the right-hander would rejoin the rotation. DeSclafani, 13-7 with a 3.17 ERA and two shutouts last year, is 0-1 with a 6.08 ERA in three starts this season.

Dodgers: In a shuffling of the rotation, left-hander Clayton Kershaw (4-0, 1.80 ERA in five starts) will start Saturday against San Francisco. Left-hander Julio Urias, previously named Saturday's scheduled starter, will pitch Sunday instead to get extra rest. The Giants have not named a probable starter.