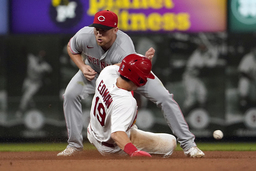 ST. LOUIS (AP) Andre Pallante took a shutout into the sixth inning in his second major league start, helping the St. Louis Cardinals snap a three-game skid with a 2-0 win over the Cincinnati Reds on Friday night.

Pallante (2-0) allowed four hits and two walks in 5 1/3 innings and had three strikeouts.

"I felt like I did a good job settling down," Pallante said. "I kept my fastball down, mixed a little of my off-speed, kind of found my curveball there towards the end and got a lot of ground balls."

Genesis Cabrera and GIovanny Gallegos combined to pitch 2 2/3 scoreless innings before Ryan Helsley pitched the ninth for his fourth save in six chances.

The win moves the Cardinals a half-game ahead of Milwaukee and into first place in the NL Central Division.

"It's early, but it's good," Cardinals manager Oliver Marmol said. "I don't care how early it is, you want it to be people chasing you. You don't want to be chasing people. Our goal is to have people chase us the rest of the way."

Paul Goldschmidt walked with two outs in the bottom of the first to reach base in his 46th consecutive game. He scored when Nolan Arenado singled to right field, and Aristedes Aquino's throw to try and catch Arenado after rounding first base skipped past Joey Votto.

Arenado then scored when Tyler O'Neill singled to third base and Brandon Drury's throw to first skipped away from Votto, giving St. Louis a 2-0 lead.

"Those are just things that are part of the game," Castillo said via a translator. "Obviously no one's perfect, no one's going to be perfect. But what I'm glad is that we were able to battle today. We were able to get through those innings."

The Reds loaded the bases in the eighth after Gallegos walked Colin Moran, Drury and Votto, but Kyle Farmer popped up to shortstop Tommy Edman to end the threat

The Cardinals activated OF Dylan Carlson from the 10-day injured list and optioned OF Lars Nootbaar to Triple-A Memphis. Carlson hit .247 with two home runs and 11 RBI in 39 games before missing the last 18 games with a strained left hamstring.

Reds: Placed C Tyler Stephenson on the 15-day injured list with a broken right thumb sustained in Wednesday's game against Philadelphia. Stephenson is expected to be out four to six weeks and his trip to the injured list marks the 28th stint for a Reds player this season. The club recalled 2016 second-round draft pick Chris Okie from Triple-A Louisville. Okie, 27, made his major league debut behind the plate as a defensive replacement in the bottom of the eighth inning.

Cardinals: RHP Jack Flaherty (right shoulder inflammation) allowed a solo home run as the only hit against him in a four inning rehabilitation start for Triple-A Memphis.

"I think it's always exciting when you start to see a guy like that who's a game-changer getting closer to joining the team," Marmol said. "We've got to make sure we stay on track with our plan, make sure he recovers well, goes back out a couple more times and then it'll be good to see him once he gets here."

C Yadier Molina was held out of the lineup with general soreness, but Marmol expects him to be in the lineup Saturday to catch longtime battery mate RHP Adam Wainwright.

Wainwright (5-4, 2.73 ERA) is 10-16 in 37 career appearances against Cincinnati. The Reds are the only team he has a losing record against where he has accumulated more than one decision. Cincinnati counters with RHP Hunter Greene (3-7, 5.40 ERA), who allowed one hit and faced the minimum 21 batters in seven shutout innings in a rain-shortened 1-0 win over Arizona on Monday night.