Chisholm, Aguilar each hit 2 HRs as Marlins down Astros 7-4 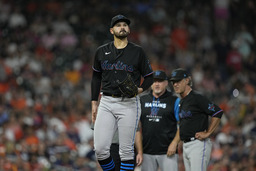 HOUSTON (AP) Jazz Chisholm Jr. wasn't celebrating his accomplishments after hitting two home runs Friday night in a win over the Houston Astros for his second multi-homer game this week.

The Miami Marlins star was already looking to do more.

"I wouldn't mind another one tomorrow and have three," he said before flashing a huge grin.

Jesus Aguilar also homered twice to power the Marlins to their fourth straight win in the 7-4 interleague victory.

"We're just here to enjoy it," Chisholm said. "We're just going to have fun every day, but we're never satisfied with what we do. We're going to keep on going. We're not in first place, so we've got to just keep going."

Chisholm and Aguilar both had solo shots in the first inning before each hitting two-run blasts in the fifth to make it 6-1 in the first meeting between these teams since 2017.

The offensive fireworks came on a night when starter Pablo Lopez exited in the fifth inning with a bruised right wrist after taking a comebacker off it. The team announced that X-rays were negative.

"With the X-rays coming back negative, you feel better," manager Don Mattingly said. "It's just a matter of getting the swelling out of there right away and see where it goes the next couple of days."

Friday marked the fourth time in franchise history the Marlins have had two players hit multiple homers in a game and the first since Giancarlo Stanton and Garrett Jones did it on May 23, 2015.

Chisholm, who has 12 home runs this season, also hit two Tuesday in a win over the Nationals. Aguilar's first homer was the 100th of his career and he has eight this season.

Houston starter Luis Garcia (3-5) allowed five hits and five runs, including a career-high three homers, in 4 1/3 innings to lose his fourth straight decision after winning three of his first four.

Cole Sulser allowed one hit in 1 2/3 scoreless innings and Tanner Scott pitched a perfect ninth for his fourth save.

Michael Brantley and Kyle Tucker both homered, and Yordan Alvarez had three hits and an RBI for the Astros, who lost for the third time in four games as they went 2 for 16 with runners in scoring position.

"We had a number of opportunities with runners on and less than two outs and that hurt us, but we couldn't keep the ball in the ballpark, either," manager Dusty Baker said.

The Marlins were up by 4 in the sixth inning when the Astros loaded the bases with two outs, but Steven Okert retired Alex Bregman to leave everybody stranded.

Chisholm sent Garcia's third pitch of the game into the bullpen in right-center for his second leadoff homer this season and the fifth of his career. There were two outs in the inning when Aguilar's homer made it 2-0.

Brantley cut the lead to 1 when he knocked one into the bullpen with one out in the bottom of the inning.

Garcia settled down after the tough first inning and had thrown three scoreless frames when Bryan De La Cruz singled with one out in the fifth. Chisholm then deposited his second homer into the bullpen to extend the lead to 4-1.

Garcia then walked Garrett Cooper to end his night and Phil Maton took over. He struck out Jorge Soler before Aguilar's second homer made it 6-1.

"The two two-run homers kind of pushed us out enough that we were able to kind of get a little bit more cushion and kind of sustain that," Mattingly said. "It wasn't like a one-run game. We had some room for error."

There was one out in the fifth inning when Lopez was injured on a single by Brantley. The ball hit Lopez's wrist and bounced away from the mound. Lopez immediately grabbed his wrist and winced in pain.

Trainers came out to check on him and he threw a couple of warmup pitches before being taken out of the game, walking off the field and into the clubhouse.

He was replaced by Richard Bleier, who was greeted by a single by Bregman before Alvarez hit an RBI single to cut the Marlins' lead to 6-2. Houston added another run when Tucker grounded into a forceout that scored Bregman.

Tucker's home run came on a solo shot in the seventh.

Marlins: Announced Friday that 3B Brian Anderson was diagnosed with a mild disk bulge in his lumbar spine. There isn't a timeline for his return to baseball activity. ... RHP Anthony Bender (back stiffness) threw a bullpen session of 15 pitches, which were all fastballs, on Thursday.