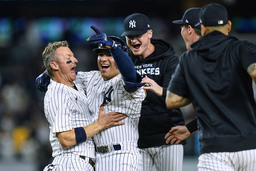 NEW YORK (AP) As his line drive landed safely in left field, Jose Trevino tossed his bat aside and broke into a big smile on the way to first base.

Come on out and celebrate, he waved to Yankees teammates hopping over the dugout railing.

At last, a hit in extra innings! And all it took was one.

Trevino finally snapped a stalemate in the 13th with a pinch-hit single Friday night that gave New York a 2-1 victory over the Chicago Cubs.

"I was just ready - whenever," Trevino said. "We just needed one hit."

Gleyber Torres homered for the Yankees in the fourth, but neither team managed a hit after the ninth until Trevino came off the bench following an intentional walk to Aaron Hicks and delivered with two outs and runners at second and third.

Batting for fellow catcher Kyle Higashioka, Trevino laced a 1-1 sinker from Alec Mills (0-1) over shortstop to give the major league-leading Yankees (42-16) their ninth victory in 10 games.

"Every time he gets an opportunity to do something for the team, he does," Torres said. "He showed tonight."

Jason Heyward hit his first home run this season for the Cubs, making their first visit to Yankee Stadium since April 2014. Chicago (23-34) dropped its fourth straight.

The teams matched Tampa Bay and Baltimore on May 20 for the longest game in the majors this season by innings.

Luis Severino struck out 10, including five of his first six batters, and provided six innings of one-run ball to steady a strong Yankees rotation coming off three uncharacteristically rugged outings in Minnesota.

Severino raised his arms and clapped into his glove when center fielder Aaron Judge saved at least one run and probably two with a diving catch to end the third.

Moments earlier, Torres was positioned perfectly in an infield shift to throw out a runner at the plate.

New York reliever Clarke Schmidt was pumped up after getting double plays to end each of his two scoreless extra innings. Ron Marinaccio (1-0) worked one scoreless frame for his first major league win.

"The bullpen has been amazing for us," Torres said.

Even with the automatic runner on second base to start every extra inning, neither team was able to break through until the 13th as Yankees fans grew restless. But they began to buzz when Trevino popped out of the dugout to pinch-hit.

A pleasant surprise and a fan favorite already in his first Yankees season after arriving from Texas in an April trade, Trevino also had a game-ending hit in the 11th on May 24 against Baltimore.

This one also made for a heartwarming gift for his son, who got to stay up late to see it on his fourth birthday and then FaceTime with daddy.

"He wanted the Yankees to win for his birthday," Trevino said. "He was yelling at me asking me if I won the game."

Wade Miley was activated from the injured list to start for the Cubs but didn't last long. He threw three shutout innings, then exited with left shoulder soreness.

The left-hander had been sidelined since May 26 with a shoulder strain after missing the first five weeks this season with elbow inflammation.

"It was something in the back of my shoulder, kind of the same thing we've been dealing with. I felt so good the last two weeks," Miley said. "Maybe I couldn't give it enough time but that's on me, I pushed myself back. It's hard to say. I've been feeling good."

Daniel Norris replaced Miley in the fourth and gave up Torres' 11th home run on his first pitch.

Heyward connected leading off the fifth, an opposite-field shot to left for his first home run since Sept. 8 last year.

GOOD TO SEE YOU AGAIN

Yankees first baseman Anthony Rizzo was 0 for 4 in his first game against the Cubs since they traded him to New York last July. He also walked and was hit by a pitch.

Cubs cleanup hitter Frank Schwindel, from nearby New Jersey, had a rough night with a large cheering section in the stands. He went 0 for 5 and grounded into a double play with two on to end the 10th.

Cubs: Placed starting pitcher Marcus Stroman on the 15-day injured list, retroactive to June 7, with right shoulder inflammation. Chicago reinstated catcher Yan Gomes (left oblique strain) and infielder Jonathan Villar (mouth injury) from the 10-day injured list. RHP Michael Rucker and INF Alfonso Rivas were optioned to Triple-A Iowa. ... Nick Madrigal (groin tightness) slowed up running out a grounder to end the 12th and was replaced at second base in the bottom half. ... Seiya Suzuki remained on the IL with a sprained left ring finger, but manager David Ross said the rookie outfielder could still be activated this weekend. Suzuki was set to take a full round of batting practice. "It feels like day to day, but it's a slow process right now with Seiya," Ross said. ... The team is giving Kyle Hendricks extra rest while he deals with some physical issues, but Ross said the right-hander threw a bullpen Friday and will pitch "in the near future." Chicago needs a starter for the series finale Sunday, but Ross said the club has multiple options.