Nimmo, Canha each drive in 3 runs as Mets defeat Angels 7-3 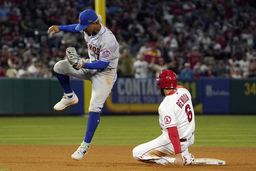 ANAHEIM, Calif. (AP) When a baseball team is getting solid production from the top of the order, along with clutch hitting with runners in scoring position, it usually produces a winning lineup.

Those two factors are among many why the New York Mets have the best record in the National League.

Brandon Nimmo and Mark Canha both had two hits and three RBIs and the Mets were 5 for 10 with runners in scoring position as they bounced back after two straight losses with a 7-3 victory over the Los Angeles Angels on Friday night.

"It was a good night for the top of the lineup and for the lineup as a whole. We were able to put up some runs and keep the pressure on them and not really let them come back," said Nimmo, who came into the game 3 for 24 during the first seven games of the road trip.

Every Mets starter had at least one hit for the fourth time this season as the NL East leaders had 13 in the game. It's the third time on this California trip New York has had at least 13 hits.

"He's one guy that sneaks up on you," manager Buck Showalter said of Canha. "He's at a stage of his career where he doesn't get out of what he knows works."

David Peterson (3-0), the second of six Mets pitchers, allowed one run in 2 2/3 innings of relief to get the win.

Brandon Marsh had three hits, drove in three runs and had the first multi-homer game of his career. The Angels snapped a franchise-record 14-game losing streak Thursday, but haven't won two straight since May 24.

Nimmo homered for the first time since April 25 when his solo shot over the wall in right-center extended the lead to 4-2 in the fourth inning.

The center fielder then added a two-run double down the left-field line in the sixth to put New York up by four.

Canha continued his hot hitting with a two-run, bases-loaded double in the second inning to chase Angels starter Jhonathan Diaz (1-1). It was Canha's ninth hit with two outs and runners in scoring position, which is fifth in the NL. He also had a one out, RBI single in the sixth.

Diaz appeared as if he might get out of the inning after base hits put runners at first and third with no outs, but shortstop Andrew Velazquez was unable to make a play with two outs on a hard-hit grounder by Tomas Nido to drive in Jeff McNeil. Canha's double two batters later ended the lefty's night.

The Angels responded with two runs in the bottom of the inning. Jared Walsh led off with a single before Marsh crushed Tylor Megill's sinker into the stands in right-center. The 449-foot homer is the longest ball hit at Angel Stadium this season.

Marsh then connected for a solo shot just over the short wall in right field in the sixth to bring the Angels within 7-3. It was the fourth time this season Marsh has had a three-hit game.

While the Mets were stellar with runners in scoring position, the Angels were 0 for 7.

"We had some spots where one swing might have got us back in the game or kept the rally going. It just didn't happen tonight," manager Phil Nevin said. "Marsh's at-bats were really promising. We made a little adjustment with his front foot and I thought it was noticeable seeing him get that swing off against the lefty."

Megill went 3 1/3 innings in his first start since May 11 due to right biceps inflammation. The Long Beach native allowed two runs on five hits and struck out four.

Diaz was called up for the fourth time this season and was making his third start. The right-hander allowed three runs and five hits in 1 2/3 innings.

Mets: 1B Pete Alonso returned to the lineup and went 1 for 5. He missed Wednesday's game after being hit by a pitch in the right hand Tuesday in San Diego. ... CF Starling Marte (quad tightness) did some running before batting practice, but missed his second straight game.

Angels: 3B Anthony Rendon was activated from the injured list after missing 12 games due to right wrist inflammation. He went 0 for 3 with a walk.

Mets: RHP Carlos Carrasco (7-1, 3.52 ERA) has won his last four starts and struck out a season-high 10 in his last outing Monday in San Diego.

Angels: RHP Michael Lorenzen (5-3, 3.69 ERA) has given up eight runs in 12 1/3 innings in his last two starts. It also marks the debut of the Angels wearing their City Connect uniforms.