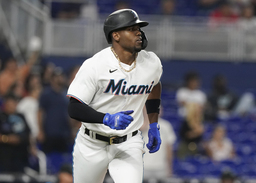 MIAMI (AP) Jazz Chisholm Jr. homered twice, including a grand slam, and had a career-high six RBIs as the Miami Marlins beat the Washington Nationals 12-2 on Tuesday night.

"I always trust my secondary pitches," Cabrera said through a translator. "You want to go as far as you can. That's what you want as a starter."

The Marlins have scored 26 times in Cabrera's first two outings. They beat Colorado 14-1 on June 1.

"It's good to see how he continues to make pitches," Marlins manager Don Mattingly said. "Just continue to attack, continue to stay in the zone and trust your stuff."

"Honestly, I thought it was a ball," Chisholm said. "It looked good to me though. I put a good swing on it and it went over for a homer."

Homers from Fortes and Soler keyed another five-run inning in the fourth.

Fortes drove in a career-high four runs and has homered twice since getting recalled from Triple-A on May 27.

"Everyone goes through stretches that they swing it better than others," Fortes said. "I'm just going through a stretch right now that I am seeing it really well."

Chisholm hit his 10th homer of the season in the fifth, a two-run shot off Machado. It was the second multi-homer game of Chisholm's career.

Cabrera's string of 11 scoreless innings since being called up ended on Luis Garcia's solo homer in the sixth.

"(After) the first inning I thought it was going to be a good day for him," Nationals manager Dave Martinez said. "But when you fall behind some of those hitters, you have to throw pitches over the plate and they're going to get hit."

Marlins players and coaches met for 90 minutes prior to the game. Miami started the season 12-8 but went 7-19 in May. The Marlins began Tuesday fourth in the NL East, 13 1/2 games behind the first-place New York Mets.

"It was my idea to get the group together and talk," Mattingly said. "We have higher expectations for ourselves as a team. On the baseball side, I'm disappointed about that. On the other part, it was really more about to have everybody talk."

Nationals: RHP Stephen Strasburg will make his return on Thursday. He is recovering from thoracic outlet syndrome surgery and has not pitched since June 1, 2021.

Marlins: OF Jesus Sanchez exited in the second inning because of right upper back tightness. ... 3B/OF Brian Anderson (lower back spasms) underwent an MRI Monday and has a follow-up visit with a spine specialist Wednesday.