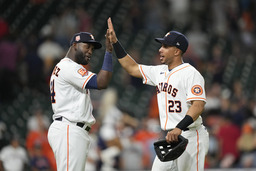 There was no trouble between the teams one night after beanballs led to a bench-clearing scuffle. Houston bench coach Joe Espada filled in for manager Dusty Baker, who served a one-game suspension after he and reliever Hector Neris were ejected from Monday's game.

Verlander (7-2) yielded one run on six hits and improved to 3-1 with a 2.93 ERA in four starts against the Mariners this season.

"Obviously, every strikeout is one less ball in play, so chances are better to have success," Verlander said. "I don't go out hunting for strikeouts really ever. They just kind of happen. It was nice to see some of the adjustments I made I think carried over into my start, and I was able to have a little more swing-and-miss stuff."

Verlander was tagged for six runs and four homers in his last outing against the Mariners on May 27.

"I think it was more execution than anything," Verlander said. "I've been a bit off recently executing quite a few pitches. Particularly last time I played these guys they took advantage of some of those mistakes. Today, I was able to locate all my stuff better and made some adjustments between starts mechanics-wise to hopefully be a bit more consistent, and I felt like I was able to do that."

Rafael Montero walked the bases loaded with one out in the eighth but induced an inning-ending double play from Abraham Toro.

Ryan Pressly pitched the ninth for his 11th save.

Alvarez hit his 17th home run in the eighth, just getting it over the right field fence and the outstretched glove of Taylor Trammell to extend Houston's lead to three.

After Toro gave the Mariners a 1-0 lead in the fourth on an RBI groundout, the Astros responded with RBI singles from Kyle Tucker and Jeremy Pena in the bottom half.

"We had some traffic," Seattle manager Scott Servais said. "We had some chances. Tonight was that ultimate - we need that big hit. Certainly in the eighth inning there, I thought we had a really good shot against Montero to at least tie the game, but he didn't find a hole."

Chris Flexen (2-7) allowed two runs and five hits in 6 2/3 innings. Flexen, who dropped to 1-3 against Houston this season, has permitted three runs or fewer in each of his four starts versus the Astros.

"I thought Flex did a great job," Servais said. "He kept them off balance all night long. He had that one little hiccup there where he gave up a couple runs early in the ballgame, but Verlander was on top of his game. He certainly made quite a few adjustments from the last time we faced him, which we expected him to do. That's why he's one of the better pitchers in the game."

Mariners: 1B Evan White (sports hernia) was pulled off his rehabilitation assignment after reaggravating his groin or hip issue that was causing the discomfort. . OF Kyle Lewis (concussion) has begun cardiovascular activities but not baseball activities yet, Servais said.

Astros: RHP Lance McCullers Jr. (right forearm strain) threw a 25-pitch bullpen. . RHP Jake Odorizzi (lower left leg) threw a bullpen as well and is expected to do some field work on Wednesday, Baker said. . LHP Blake Taylor has left elbow inflammation, general manager James Click said. Baker would not give a timetable for when Taylor could return, but said it would be "a while." . LHP Parker Mushinski was placed on the 15-day injured list with left elbow discomfort. The Astros recalled RHP Brandon Bielak from Triple-A Sugar Land.

Neris was suspended four games by MLB after he hit one batter and nearly drilled another in the head Monday. Neris was also fined an undisclosed amount, but he appealed the suspension and was available Tuesday.