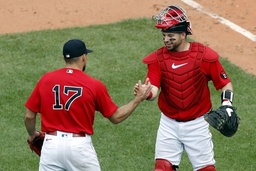 BOSTON (AP) Rougned Odor hit a three-run homer and the Baltimore Orioles beat the Boston Red Sox 4-2 Saturday to earn a split of a day-night doubleheader.

In the opener, Nathan Eovaldi pitched a seven-hitter for his first career complete game in Boston's 5-3 victory.

Austin Hays and Ryan McKenna each added two hits in the nightcap for Baltimore, which has won two of the first three in a five-game series.

Christian Vazquez had three hits for Boston, which had won eight of 10.

Odor homered just over Boston's bullpen to make it 4-0 in the third inning. The drive came after Ramon Urias hit an RBI single against 23-year-old righty Josh Winckowski (0-1), who made his major league debut.

"It means a lot," said Reyes, who came up in Boston's system in 2015, about pitching in Fenway Park.

"I was here, part of the Boston Red Sox organization for seven years," he said, breaking into a smile. "Before the game started, I was waiting, looking at Fenway Park, saying `I'm here. Let's do it.'"

Joey Krehbiel (2-3) pitched 1 1/3 innings in relief for the victory. Jorge Lopez got four outs for his sixth save.

In the opener, Rafael Devers had four hits for Boston and Kike Hernandez added a two-run single. Devers went 0 for 4 in the second game.

It's the most starts for a pitcher prior to throwing a complete game in MLB history, according to STATS.

"It definitely means a lot to me,? Eovaldi said. "Especially with how the game's changing now and things like that, and injuries I've had."

Eovaldi had Tommy John surgery twice - once in high school and again in 2016 - and was sidelined in 2019 after having "loose bodies" removed in his elbow a year earlier.

"Every starter wants to go out there and finish his start," he said. "It means a lot to me."

There was some applause when he trotted out for the ninth with the rarity of complete games in baseball.

The Red Sox had rebounded after blowing a pair of six-run leads in a loss on Friday night. The opener was tied at 3 before slumping Bobby Dalbec's pinch-hit homer in the sixth.

Boston's bullpen was tagged for 10 runs on Friday.

"He was great, especially in the second part of the game," Red Sox manager Alex Cora said of Eovaldi. "We needed to re-set (the bullpen) at one point."

Dalbec, who entered hitting just .162 having lost most of his playing time at first base, drove a fastball into Boston's bullpen against Keegan Akin (1-1).

Less than 12 hours after wiping out a six-run deficit by outscoring the Red Sox 10-0 over the final three innings, the Orioles tied it at 3 in the fifth when Robinson Chirinos hit Eovaldi's hanging curveball over the Green Monster.

Orioles: A day after saying that 24-year-old INF prospect Jahmai Jones had season-ending Tommy John surgery, they designated him for assignment and called up RHP Cody Sedlock.

Red Sox: Placed RHP Hansel Robles on the 15-day injured list with back spasms. . 2B Trevor Story had the first game off and SS Xander Bogaerts rested the second before grounding out as a pinch-hitter.

Odor went 0 for 4 in the opener, ending his career-best 11-game hitting streak before his HR in the nightcap.

Winckowski fanned Odor swinging in the second with a 96 mph fastball for his first big league K. Catcher Vazquez tossed the ball to Boston's dugout.

In addition to Robles going on the IL, the Red Sox demoted right-hander Hirokazu Sawamura to Triple-A Worcester and recalled right-handers Ryan Brasier and Phillips Valdez.