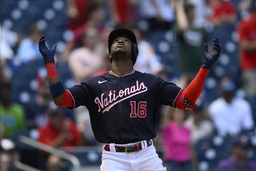 WASHINGTON (AP) Victor Robles homered, singled twice and drove in a career-high six runs as the Washington Nationals beat the Colorado Rockies 13-7 Saturday in the first game of a split doubleheader.

Riley Adams homered and scored three times for the Nationals, who have won three straight for the first time this season.

Robles singled his first two times up. After Colorado rallied within 8-7 in the top of the fourth, he answered in the bottom half with his first homer of the season, a three-run drive.

Robles, who was hit by a pitch in the sixth and popped out in the eighth, raised his average from .228 to .248 after beginning the season 0 for 18.

"I believe in myself and in the work I've put in," Robles said through an interpreter. "I know the results will be there eventually and I've just got to keep grinding."

"I truly believe in him and so does this organization," manager Dave Martinez said. "He's got unbelievable skills and we just got to try and get it out of him and we're gonna stick with him. As I've said before, there's gonna be days where I'll give him a little breather but we want him to be our everyday centerfielder."

C.J. Cron had two hits including his 13th home run and Charlie Blackmon had three hits for the Rockies, who have lost three straight and 14 of 18. Brendan Rodgers extended his hitting streak to 14 games with an infield single.

After Cron gave the Rockies a quick 3-0 lead with his homer in the first, the Nationals came back with two-run singles from Nelson Cruz and Robles in their half, and Robles' RBI single capped a three-run second.

Colorado collected 12 hits in the loss and now has 20 games this season where the offense produced 10 or more hits, the most in the majors.

ROCKIES: RHP Antonio Senzatela (lower back strain) made his first rehab start for Triple-A Albuquerque on Friday and allowed four runs on eight hits in four innings. He threw 77 pitches and walked one with no strikeouts.