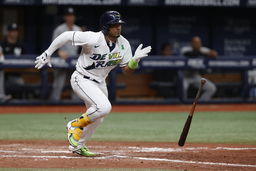 Yandy Diaz had a tiebreaking infield hit in the seventh and Manuel Margot extended his hitting streak to 15 games with an RBI single in the eighth.

"Like we say, if you can't hit the starter, hit the reliever," Margot said through a translator. "When they have good pitching, you have to make adjustments and I think in time, we were able to make that adjustment and get those runs on base."

Kluber allowed one run and three hits, walking none and striking out five. Last May, the two-time Cy Young Award winner pitched a no-hitter for the Yankees against Texas.

Cole struck out 10, giving up one run and two hits with three walks.

J.P. Feyereisen (4-0) got the win his 19th straight scoreless relief appearance. Colin Poche pitched the ninth for his second save in two tries. Jason Adam also pitched an inning in the combined four-hitter.

With the score 1-all, Kevin Kiermaier opened the Rays seventh with a single on the first pitch thrown by reliever Lucas Luetge (1-2). Francisco Mejia followed with the key hit of the game - a popup down the right-field line that dropped for a double when second baseman Gleyber Torres overran the ball.

"When it first went up, I thought, 'oh no, it's in no-man's land out there,'" Yankees manager Aaron Boone said. "It looked to me like Gleyber got a pretty good break on it. It just kind of (fell) in that perfect spot where it's going to be a tough play."

Kiermaier was thrown out at the plate by first baseman Anthony Rizzo on a grounder, but Diaz bounced a chopper down the third-base line for a 2-1 lead.

After walking Yandy Diaz to lead off the first, Cole retired 14 in a row before giving up his first hit, Mejia's two-out single in the fifth.

Cole is 1-6 in 12 career starts against Tampa Bay. He threw 105 pitches, including 26 each in the first and sixth innings.

It was Cole's 44th double-digit strikeout game since the start of the 2018 season, the most in the majors in that span.

Cole walked Ji-Man Choi and Franco with two outs in the sixth and Randy Arozarena drove in Tampa Bay's first run with a single, only the Rays' second hit.

DJ LeMahieu, playing for the first time after missing four games with a sore left wrist, opened the game with a double off the right-field wall. After Aaron Judge's single, Rizzo had a sacrifice fly for the Yankees' only run.

After scoring in only one of the first 23 innings in the series, the Rays broke through with six hits in the late innings and produced three runs.

"We've faced three really good pitchers in the last three days and they threw really well," Kluber said. "I think the guys kind of stayed the course, not jumping ship or changing approach or anything like that. Eventually you see the rewards of it."

Kluber and three relievers retired 19 of the last 20 Yankee batters.

Yankees: RHP Domingo German, on the 60-day injured list since March with right shoulder impingement syndrome, is close to starting a rehab assignment. . . . OF Tim Locastro (left lat strain) is getting regular at-bats and awaiting a decision on a rehab assignment.

Rays: RHP Andrew Kittredge (low back tightness) played catch Friday and Saturday after shutting himself down for four days, and expects to pitch off a mound soon. . . . RHP Luis Patino (left oblique strain) had a bullpen session Saturday.

RHP Luis Severino (3-0, 3.02) will pitch for the Yankees on six days' rest against LHP Shane McClanahan (4-2, 2.06) in Sunday's series finale. McClanahan is 0-2 in three career starts against New York.