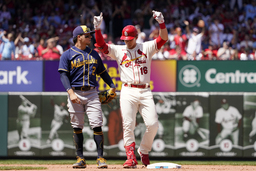 ST. LOUIS (AP) It was quite a day for a pair of childhood friends playing for the St. Louis Cardinals.

"I mean, you know, this team makes it special to by taking us in the shower and dousing us with everything," Gorman said. "So, it was fun today."

Liberatore (1-0), the organization's minor league player of the year for last season, pitched around a couple of Gorman errors in five scoreless innings. He allowed two hits, struck out six and walked three.

"It looked like the game was slow to him, which was good to see the first time at home," manager Oliver Marmol said. "Good crowd, didn't make the moment any bigger than it was."

Gorman and Liberatore have been friends since playing T-ball together in the Phoenix suburbs.

"I think that's a very fitting way for it to have gone down today and something that I look forward to seeing a lot more of," Liberatore said.

It was the first time the Cardinals had two players with four RBIs in the same game since Sept. 27, 2016, when Aledmys Diaz and Jhonny Peralta accomplished the feat.

Gorman's 449-foot drive cleared the bullpen in right field in the first. With an exit velocity of 110.6 mph off the bat, it was the longest home run in Busch Stadium this season.

Gorman snapped a 0-for-11 skid with the outburst.

"What it comes down to is being on time, and when I'm late and they're thrown up there, it's gonna be tough to hit those pitches," Gorman said. "So, simplified today and was able to get to those pitches."

Gorman added an RBI single in the third, and Goldschmidt made it 5-0 with three-run shot that landed in the stands just past the outstretched glove of center fielder Lorenzo Cain. Goldschmidt has reached safely in a career-high 33 straight games.

"He's using the whole field and he's pulling the ball for homers, he's going backside," Marmol said. "It's all around, it's highly impressive."

Gorman hit a two-run double and Goldschmidt singled him home as the Cardinals blew it open with three more in the fourth.

"I just wasn't able to hit a lot of spots," Brewers starter Adrian Houser said. "I didn't really have good command today and they put some good swings on mistakes I made and that's what they're supposed to do."

"I thought he just left some fastballs in the middle of the plate, really," Brewers manager Craig Counsell said. "I thought his off-speed stuff was pretty good, he just kind of missed on some fastballs and they made him pay for it."

Cardinals: OF Tyler O'Neill (right shoulder impingement) could go out on a minor league rehab assignment early next week.

Right-hander Miles Mikolas (3-2, 1.96 ERA) will start for the Cardinals in the finale of a four-game set Sunday against the Brewers and RHP Corbin Burnes (2-2, 2.18 ERA). Mikolas allowed one run in 6 2/3 innings in a win over Milwaukee on April 15, and his six career wins against the Brewers are his most against any team. Burnes went 1-1 with a 1.64 ERA in four starts against St. Louis last season.