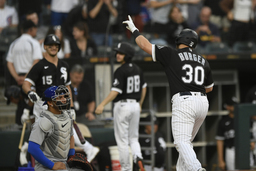 CHICAGO (AP) Keegan Thompson insisted he was more lucky than good. Either way, the Chicago Cubs will take what he gave them.

Thompson (5-0) matched his longest outing of the season, allowing one run and five hits at Guaranteed Rate Field. The right-hander struck out four and walked one in his third start and 11th appearance.

Thompson felt he was off in the strike zone and got away with pitches that could have been hit hard. One time he didn't was when Jake Burger homered.

"I felt like I was kind of all over the place and not really hitting a ton of spots," Thompson said. "I just got really lucky and missed all the barrels."

Cubs manager David Ross said Thompson will need a few days off after throwing a season-high 77 pitches. But with 10 games in the next eight days, he could be in line for another start during a busy stretch.

Schwindel capped a two-run first and two-run seventh with two-out RBI singles. His hit to right in the seventh made it 5-1 and chased Cueto (0-1).

Patrick Wisdom also drove in two. Nico Hoerner had three hits and scored a run. The Cubs were aggressive at the plate and on the bases, and they came out on top after giving up their highest run total in 23 years in a 20-5 beating at Cincinnati two days earlier.

Cueto gave up five runs and nine hits after tossing six scoreless innings against both Kansas City and the New York Yankees in his first two starts for the South Siders.

Burger launched his second homer in three games when he connected off Thompson in the fifth and finished with three hits. Center fielder Adam Engel robbed Willson Contreras of a home run in the Cubs ninth. But it was another frustrating game for the White Sox, particularly at the plate.

La Russa said when the White Sox are patient, opposing pitchers throw strikes and gain the advantage in the count. When they're aggressive, they tend to chase pitches.

"Darned if you do and, either way," he said.

The White Sox had won seven of eight against the Cubs, including a two-game sweep at Wrigley Field from May 3-4. But the North Siders struck early, scoring two in the first and another run in the second to go up 3-0, before padding their lead later.

"It was a quick three runs," Hoerner said. "But to tack them on at the end was really huge."

The White Sox designated left-hander Dallas Keuchel for assignment. He was 2-5 with a 7.88 ERA in eight starts.

Cubs: OF Seiya Suzuki (sprained left ring finger) was out of the lineup after leaving Thursday's game. . The Cubs activated OF Clint Frazier (appendicitis) from the 10-day injured list. They also transferred OF Michael Hermosillo (strained left quadriceps) back to the 10-day IL and returned LHP Brandon Hughes to Triple-A Iowa.

White Sox: GM Rick Hahn said he expects two players to go on the restricted list for the team's three-game series at Toronto that starts Tuesday because they are not vaccinated. . OF Eloy Jimenez (right knee surgery) began his rehab assignment with Triple-A Charlotte, though Hahn does not expect him to return to the White Sox during their six-game trip to Toronto and Tampa Bay. . Hahn said OF Luis Robert is improving, though he's not sure if the Cuban star will return during the Blue Jays series. He expects Robert to be ready when the White Sox visit Tampa Bay. . 3B Yoan Moncada (quad soreness) was out of the lineup for the second consecutive game, though La Russa said he was available to pinch-hit and run.