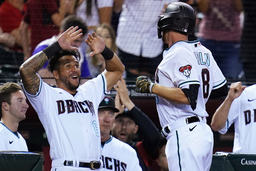 Arizona hit four homers and won for the fifth time in six games. The Diamondbacks lead the National League with 60 homers.

"I don't want to say that's who we are," Lovullo said. "I don't want us to be known as a home run-hitting team. I want us to be known as good hitters who hit home runs because we are balanced and through the baseball. Our mindset is hard line drives in the middle of the diamond, 90 miles an hour or greater, and good things will take off from there."

Daulton Varsho and David Peralta also homered for the Diamondbacks, who have 15 homers in their last six games, including seven in a 10-6 victory against the Chicago Cubs at Wrigley Field last Friday. They have 11 comeback victories.

"I've been saying this since the year started - we're going to be an annoying team to play," Arizona stater Zac Gallen said. "We have a lot of guys in there with something to prove. A lot of guys with chips on their shoulder. We're not going to have names that jump off the page. We grind it."

MJ Melendez homered, doubled and drove in three runs for Kansas City, which has lost six in a row and eight of 10.

Melendez's RBI double sparked a three-run sixth inning capped by rookie Dairon Blanco's two-run single for a 6-3 lead before the Diamondbacks scored five two-out runs in the last of the inning for reliever Joe Mantiply (2-0).

Amir Garrett gave up a walk and a single before being replaced by Taylor Clarke (1-1), who gave up a game-tying three-run homer to Luplow, a 408-footer that hugged the left field line.

Varsho doubled and Smith followed with a 415-foot shot to right, his second in as many games, for an 8-6 lead. Arizona had six homers in sweeping the two-game series.

"You play your role the best you can and you try to grow in that role," said Luplow, who has two pinch-hit homers this season. "You get the hand that's dealt. I was just looking for something over the middle of the plate. Not trying to do too much with it, and sometimes a lot happens."

Whit Merrifield had two hits for the Royals, who have lost leads of six, four and three runs in their last three games.

"It's hard to have three tougher ones than these three in a row," Matheny said.

Mark Melancon pitched around a leadoff single in the ninth for his 10th save in 11 chances.

Gallen entered the game with a 1.14 ERA but gave up six runs and seven hits in 5 1/3 innings. He had not given up more than two runs and five hits in any of his previous seven starts.

Diamondbacks relievers Mantiply, Ian Kennedy, and Noe Ramirez lead the NL lead with 21 appearances after each pitched Tuesday. Mantiply, 2-0 with two saves and an 0.51 ERA, has been scored upon once.

Lovullo said he was "very concerned" about the usage. "I don't want any of our guys to have 80 appearances this year," he said, "That's way too many. We embrace close games. We need our horses to go out there protect those games when we are ahead. We'll be mindful of that. I have to make sure I don't get anybody hurt."

Bobby Witt Jr. attended Arizona's clinching Game 7 victory over the New York Yankees in the 2001 World Series at Chase Field and rode in victory parade the next day, although the memories are a little fuzzy. Then again, he was only 16 1/2 months old.

"There are pictures out there with me and the trophy, but I don't remember any of that," Witt Jr. said.

Witt's father Bobby, who was 4-1 with Arizona in 2001 in the final year of his 15-year major league career, was at the games this week.

Diamondbacks: 3B Josh Rojas (left hand contusion) missed his third straight game. . A C-T scan done on RHP Zach Davies (right leg contusion) Tuesday showed no structural damage, although it remains uncertain if he can make his next scheduled start Sunday. He was removed after being struck by a 112-mph line drive from Witt in the fourth inning Monday . C Jose Herrera was activated from the covid list and C Grayson Greiner was optioned to Triple-A Reno in a corresponding move.

Diamondbacks: RHP Humberto Castellanos (3-1, 4.29) is to pitch the opener of a four-game home series against the Los Angeles Dodgers on Thursday . The Dodgers have not announced a starter.