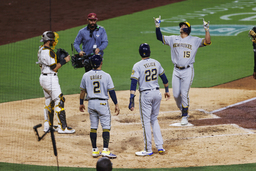 Burnes (2-2), the reigning NL Cy Young Award winner, held the Padres to one run and five hits in six innings, struck out five and walked two. The only run off the right-hander came on a double-play ball in the first and he allowed just one baserunner into scoring position the rest of the way.

"It was a day where he got better as he went," Milwaukee manager Craig Counsell said. "He was ahead of hitters and then they kind of battled back into a lot of counts and that ran his pitch count up a little bit. But then as the fourth, fifth and sixth, I thought he did a really nice job of just kind of attacking. His stuff was really good in the zone."

Burnes said his stuff "was pretty good. ... It was all going pretty much the whole time. A bunch of blooper hits and seeing-eye singles there in the first couple of innings. That's what you want to see as far as weak contact and getting off the barrel, basically.

"I think kind of throughout the whole thing we kind of felt good and felt like we did what we wanted to do. They just had a couple that kind of found holes."

Devin Williams pitched a perfect ninth for his third save.

Snell (0-2), who won the AL Cy Young Award in 2018 with Tampa Bay, allowed Brosseau's tying homer leading off the fifth inning and then was pulled with two runners on and one out in the sixth. Craig Stammen came on and allowed Taylor's three-run homer to left field, his fourth.

Snell pitched well overall, allowing three runs and just three hits on 104 pitches in 5 1/3 innings, while striking out seven and walking two. He permitted only a single in the first four innings.

Brosseau tied the game at 1 by homering leading off the fifth, driving a full-count pitch from Snell off the front of the balcony on the fourth level of the Western Metal Supply Co. Building in the left-field corner. It was his third.

Jake Cronenworth and Manny Machado opened the first with singles off Burnes, and Cronenworth scored when Jurickson Profar hit into a double play.

Brewers: Placed OF Hunter Renfroe on the 10-day injured list with a strained right hamstring and selected INF-OF Mark Mathias from Triple-A Nashville. Renfroe was injured during Monday night's 3-2, 10-inning loss. He was hitting .266 with nine home runs and 16 RBIs. Counsell said an MRI showed a low-grade hamstring strain and Renfroe could miss two weeks.